As president of the Northeast NJ Beekeepers Association, I am actively engaged in educating the general public about the importance of honey bees. One cannot underestimate the value of this function at a time when the survival and continuance of honey bees is in jeopardy. 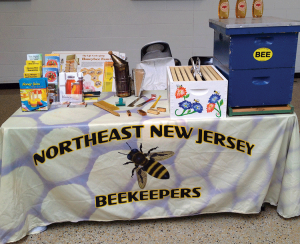 My club encompasses some of the most densely populated counties in one of the most densely populated states in the country. Being in the heart of Manhattan’s commuter communities, the Jersey suburbs have over 100 municipalities and well over one million people. This means that we receive many invitations to speak about honey bees from all the various schools, clubs, and fairs throughout the area. I try to do as many speaking engagements as I can, as I believe the more people who understand the benefits of honey bees, the better it is for all of us beekeepers. I have also found that every speaking engagement leads to one or two others. Many groups share ideas for speakers, and once your name gets around you are in demand. For example, speaking at Rotary Clubs and Master Gardener clubs are likely to lead to additional engagements at other chapters.

When I am asked what my speaker’s fee is, I always say, “I am a volunteer and donate my time, but I would ask that you make a donation to my bee club. I do bee talks to raise awareness, and also to raise money for my club.”  When people hear that 100% of the honorarium will go to your club and not into your pocket, you have made another beekeeping ally who will happily make the donation.

What to Talk About 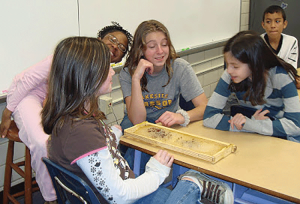 Having done over 100 hundred talks to groups of all sizes and ages, I have found that there are a few things you can do to ensure that your talk is successful and well received.

It is important to have a plan for the bee talk. For most of my talks, I have two goals:

1.) Honey bees and Yellow Jackets are not the same thing, honey bees are good and yellow jackets are bad.

Since most people get stung by yellow jackets, I think of myself as a PR agent for the honey bees. I want people to know that not everything that stings is a “bee” and the fuzzy ones will not bother you if you don’t bother them.

I know that this ignores the role of the yellow jacket in nature, but that’s not the purpose of our talks. As a spokesman for Apis mellifera, it is important for the general public to know that they are not the same as yellow jackets and that they do not do most of the stinging. The honey bee has taken the blame for too long. So my first goal is to eradicate this misinformation.

There is also confusion in the general public when it comes to swarms and the insects that partake in them. I once received a call, along with pictures, that was clearly a wasp nest hanging from a bush. I explained they were not honey bees, they were not a swarm, and I recommended that he call an exterminator to solve his problem. To which the insistent homeowner said, “But they’re free, don’t you want them?” So I replied, “Cockroaches are also free, but beekeepers don’t want them either.” I was able to get my point across that not all insects are of equal value. Therefore, it is helpful for beekeepers to educate the public as to how and where honey bees and yellow jackets live. This alone reduces the number of “swarm” calls we get when people confuse paper nests with genuine bee colonies.

2.) One third of all the food we eat is thanks to the honey bee.

As a Beekeeper, we might take for granted all the wonderful things bees do for humans. How do we effectively convey this information to a group? Just ask the group you’re speaking to if they like apples? Berries? Watermelons? Pears? And so on. You will be able to see people thinking about eating their favorite fruits. Then say, “Without the honey bee, we wouldn’t have any of these fruits to enjoy.” Now you got them where it matters most, in their appetite! It’s also good to follow up with information about the almond crop, how big it is and how 80% of the world’s almonds come from one area in California. Tell your audience that almonds are 100% dependent on the honeybee for pollination. You’ll have everyone’s attention by showing them a bee’s importance to their stomach and to a $4.3 billion dollar American business!

Another common theme that is good to cover during a bee talk is the myths and realities of honey bees. Unfortunately, most people got their information about bees from old cartoons where they came out of a (wasp) nest, formed into the shape of a big fist, and socked some unsuspecting halfwit on the chin. Or, people “learned” about bees from cheesy 1970s horror films where bees were on a mission to destroy mankind. It’s also good to always be prepared for the audience member who thought “The Bee Movie” was a documentary based on fact. I usually explain what role the drone bee does serve in a hive, and then say if the Bee Movie were accurate, it would have only been a few minutes long, and Jerry would have died, happy, with a smile on his face.

It’s also important to remember that we beekeepers have our own language, and to effectively communicate with your audience, you should use words they know, not beekeeping vocabulary. For example, instead of referring to it as “brood”, call it “babies.” Or, instead of saying, “pheromone”, say “smell.” Additionally, instead of referring to hive bodies as deeps and supers, just call them boxes. I like to use a filing cabinet as an analogy during my bee talks, and I will tell people to think of a hive as a filing cabinet, and in each “drawer”, there are 10 file folders, or what beekeepers call, “frames.”  In the bottom drawer is the “nursery”, where the bees raise their babies, or what beekeepers call, brood. The next drawer up is their pantry, where they store food for the Winter. All beehives have at least two drawers, as that’s how much space bees need to make it through the Winter. Any drawers above the bottom two are for storing extra honey. Those are what the bees fill up for the beekeeper. I only add these drawers, or boxes, during the honey season. The rest of the year, I take them off.

Don’t worry about conveying the complexities of a two-deep Langstroth hive. This is a talk for the general public. Most people know what a filing cabinet is and can understand how that relates to bee hives. Those who are interested in learning more about honey bees will approach you afterward.

It is also good to remember that a picture is worth a thousand words and real bee equipment is worth a whole lot more. We all have our favorite bee photos, and I recommend having about a half dozen of them professionally printed at 5” by 7” or larger on glossy photo paper. I have one close-up of a bee that landed on my finger. I start all of my talks with this picture, and ask the audience to guess what the bee is standing on. Once someone guesses, “finger”, I say, “This is my bee on my finger. I like to start with this photo to show you that if you don’t try to hurt a bee, it will not hurt you.” I also have a few old hive bodies that I bring to most of my talks so people can see and touch it. The same is true for my smoker, hive tool, brush, and an old veil.  By having actual equipment at your bee talks you can help make the concept of keeping bees more real for many people, and it will help them to understand more of what you are saying.

If you ever get a chance to speak at an elementary school, it will be one of the best times you’ve ever had. Some of my fondest memories are giving talks to youngsters. Because they always ask the best questions! When I am speaking to kids, I like to tell them that the entrance to a hive is like a runway and just like you can drive on the turnpike next to Newark Airport and not get hit by a plane, you can stay away from the front of the hive and avoid crashing into any bees. However, one time, this little boy asked, why are hives like Newark Airport and not like LaGuardia Airport? I always jump at the chance to speak to kids, because I know I will have fun, and I hope that if enough kids hear about bees, then their generation will grow up to be adults who put honey bees before pesticides and perfectly manicured lawns.

Speaking about bees to an audience will make you a better beekeeper. You will want to make sure that you have all of your facts in order before the talk, so organizing your speaking notes is a way for you to remember all the bee facts. Also, there are educational studies that show that one of the most powerful learning tools is teaching a concept to someone else. If you have to simplify the facts so that you can explain a concept to someone who is unfamiliar with it, that will cause you to think, and help you to process the information in different ways. That’s another reason why it’s so fun to speak to kids, you never know what they will ask, so you have to be prepared for a question on just about anything!