Honeybees pollinate crops, increase yields and give rise to a lucrative honey industry.

She calls herself a “honey girl,” having a love of all things related to honeybees and the goodness they produce.

When Genji Leclair moved from Chicago to Fremont, Mich., a few years ago, she knew her life would be different. Just how different started to unfold the day she bought a jar of Hasselman Honey.

“It was amazing, and on the jar it said, ‘Local Honey — Call Larry,’ with his phone number, so I did,” Leclair says. “Larry Hasselman was the owner, and I asked him all kinds of questions about his honey and if I could visit his honey barn.”

She did just that and proceeded to get “hands-on” by helping him pour jars of honey. One visit ended up being two and three, and so on. “I could tell he was having trouble keeping up with everything, so I helped him more and more, and he helped me set up beehives on my property,” Leclair recalls.

Hasselman mentored her for a couple of years before he retired, and she took over the honey production and started Great Lakes Bee Co. with her husband, Steve, and daughter, Lauren Kelly. In addition to selling more than 150,000 pounds of honey each year under the Hasselman name, GLBC also offers beeswax products, and the bees are rented out to help pollinate various crops, including almonds (January in California), apricots, sweet cherries, peaches and plums (April); tart cherries, pears, blueberries and apples (May).

Bees play a big role in agriculture. They pollinate crops, increase yields and give rise to a lucrative honey industry. Dinner plates across the world would look quite bare without honeybees, as about one-third of the food eaten by Americans — from nuts to fruits and vegetables — comes from crops pollinated by honeybees, USDA reports.

Commercial production of more than 90 crops rely on bee pollination, which accounts for more than $15 billion in annual U.S. agricultural production and $217 billion worldwide, according USDA’s National Agriculture Statistics Service. That’s in addition to 157 million pounds of honey produced in 2019 with a value of a little over $309 million.

To access the complete article go to; Bees are big business (farmprogress.com) 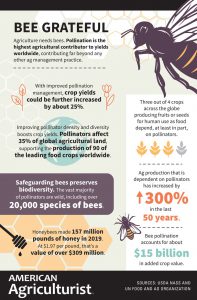