The thought of taking a 12-24 hour old larvae and transforming it into a queen is amazing. 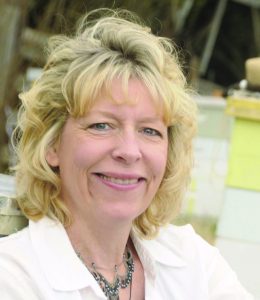 It’s been almost 20 years since I started rearing queens, and, believe it or not, I still find it just as exciting as when I first started. There’s something magical about raising your own queens. Taking an average worker larvae and sending her down the path to queendom and lifting her into a life as a royal instead of just another “one of the girls.” Hmm, this reminds me of something from when I was a little girl. Ahhh yes, Cinderella and the Disney effect, where all little girls want to be converted into the beautiful princess!

You know the story. Once upon a time there was a young girl who was being mistreated, and hence felt downtrodden and unappreciated. Until one day, a magical fairy Godmother fluttered out of nowhere and began to transform the poor soul. She started by flicking her wand and poof, the perfect makeup flawlessly applied. Another swoosh and bam! Her tangled locks swirled into an awesome hairdo. Next, the Fairy Godmother spun her about and the tattered jeans and t-shirt disappeared being replaced with a beautiful gown decked out with all sorts of bling. But the best part, when the magic truly took place, was when she stepped into sparkling, glass slippers and KaBOOM! she was a princess to die for!!! You remember how the rest of the story goes. After this amazing transformation takes place, she soon gets the attention of the handsome prince who sweeps her off her feet, places her atop his steed and gallops off into the sunset to live happily ever after in his awesome palace.

Instead of wishing that I could be the princess, now I relate more to being the fairy Godmother, especially when I raise queens. Ok, there are some slight differences here, I’m not able to change pumpkins into carriages or mice into horses, but, a worker into a queen.

So, why did I start rearing my own queens? Several reasons, actually. First of all, the idea really intrigued me. The thought of taking a 12-24 hour old larvae and transforming it into a functioning, robust queen, sounded amazing. Next, I wanted to start selecting for specific traits, such as hygienic behavior (to combat mites), increased brood production (for better honey production), and gentleness (tired of working bees with an attitude). But the main reason I started to raise my own queens (and the lab’s), I was tired of queens not being accepted or only lasting a few months before being superseded. In other words, I wanted superior, kick-butt queens heading up my colonies that lasted more than a season. This has proven to not be an easy task, but worth it in the long run.

One day, after years of rearing queens, someone asked if I could teach them how to do it. Sure, I thought. This will be fun. Next thing I know, I’m teaching several classes each year. To date I’ve taught queen rearing classes in Bolivia, Nicaragua, Ireland, England and at various bee meetings across the U.S. Teaching has always been a highlight for me, especially when I’m teaching about something I LOVE to do: rearing awesome queens.

However, in the last few years I decided to start teaching classes at my farm in Georgia. The decision to stop teaching classes at various meetings and concentrate on having folks come to my farm? Well, it came about due to a few things actually. When I held classes in other locations, there always seemed to be something out of place. It wasn’t a bad experience, not at all. The problem was, I didn’t have complete control over the classrooms, or the bees, or the lunches, or the number of students, or instrument availability, or the equipment, or the lighting, or – I decided to only teach classes at our farm in Comer, Georgia so I could have complete control over everything. When you are teaching about how to rear superior queens, everything must be in order, otherwise the students may miss out on something. 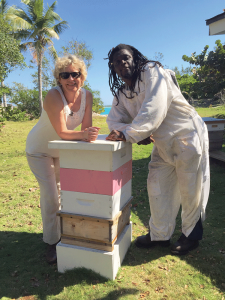 Jennifer and Ricky posing in paradise. Check out the blue water in the distance.

With that said, I still teach queen rearing to folks in other countries and in prisons throughout Georgia since it’s a bit difficult to get either 20 students from Nicaragua or inmates out of prison transported to my farm. In these situations it makes more sense for me to travel to them. Plus, it gives me an excuse to travel to some amazing places. This past February I had the wonderful opportunity to teach the first ever queen rearing class in Exuma, one of the many beautiful islands of the Bahamas. Reason it was the first class, well Exuma did not have bees until just recently.

How did the bees come to be? Let’s start from the beginning. Exuma, like I mentioned, is a small island district, which is part of the Bahamas. The island is fairly isolated and surrounded by water (imagine, it’s an island). Bees would have a hard time traveling there since the island is a good distance from the mainland. It’s also fairly new to tourism. Because of this, years ago, a group of concerned citizens formed the Exuma Foundation. In their own words, “The Mission of The Exuma Foundation is to enhance the quality of life for the people of the island of Exuma in the Bahamas, both now and for future generations to come, by encouraging and managing gifts for operating, capital, and endowment, by addressing community needs through grant making, and by providing philanthropic leadership. The Exuma Foundation (Bahamas) Ltd. seeks to maintain an environmentally sustainable campus that is a catalyst for the educational and community enrichment programs as well as a model of Exuma’s indigenous flora and fauna environment.” 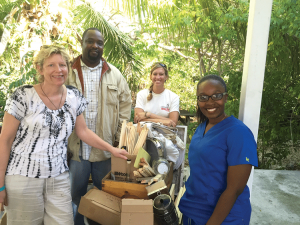 Kevin Brown of Cat Island, Catherine Booker of Exuma Foundation and Dr. Deandra Delancey of the Ministry of Agriculture.

As you can see, there is a good bit of emphasis to preserve the integrity of the island while encouraging education. Since one of the Foundation’s objectives is education and community programs, in 2014, they hired Catherine Booker as their Environmental Educator. For the past several years her objectives have been to help educate folks of all ages about the importance of protecting the environment (land and sea) and encourage small, sustainable agricultural cottage industries, like beekeeping, for instance. She’s also involved with several community initiatives, particularly those that promote marine conservation and national parks, such as the Elizabeth Harbor Conservation Partnership and the Bahamas National Trust. Since she is originally from Savannah and a UGA graduate, she connected with Ted Dennard from Savannah Bee Company and asked for assistance in getting bees to the island. It took a while but they finally managed to bring Apis mellifera to the sapphire blue waters of Exuma.

Months later Ted called me and queried if I’d be interested in helping them out by teaching queen rearing and beekeeping. Hmmmm, so let me get this right, you want me to teach queen rearing, on a beautiful island, with crystal clear waters, in January, in the Bahamas, AND get to work bees and teach about rearing queens? Whoa, I need to think about this, for like two seconds. YES, count me in! 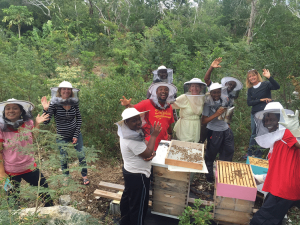 So far, the beekeeping venture in Exuma has been a huge success. The bees are extremely gentle, and they’re disease free. That’s right, no American or European Foul Brood. But, best of all, they are mite-free! Whaaaattt??? That’s right, no mites!!! Oh, and no small hive beetles either. They are so healthy, so calm, so sweet, so perfect! I was in heaven working these amazing bees. It brought me back to a time, in the good ole days, before the introduction of mites. Back in the era when bees could be bees! Think about it: mite free, beetle free, disease free, aggression free colonies. It was paradise in so many ways, for the bees and me.

While I was there, I taught two classes: one for advanced students (queen rearing) and a beginning beekeeping course. There were around 15-20 students per section. It couldn’t have been better classes. The students were all so excited to learn everything there was about bees but there were two students in particular that really got my attention. 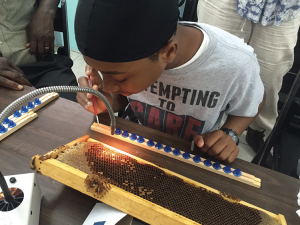 Whenever I begin a queen rearing class, I start off by asking, why are you here? Why do you want to rear your own queens? This gives me some perspective on what the students expect to get out of the class. And this class had many of the same comments that I’ve heard over the years. “I’m here for the learning experience,” or, “I’m here hoping to expand my honey bee operation”. But this time, I heard something that I hadn’t heard before. “I’m here because I want to rear a better Buckfast bee!”. The student’s name was Charlton Taylor, and this was his reason for taking the class. That’s great! A better Buckfast bee. It’s definitely become my favorite answer to date. 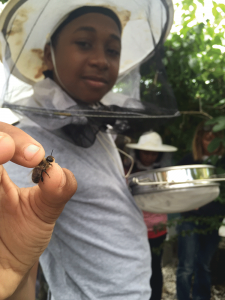 Learning how to mark queens isn’t easy, so we start with drones.

Sitting next to him was his younger brother (and the youngest student I’ve ever had the wonderful opportunity to teach), Ceon Taylor. He too had an answer I had not heard before. “I’m here to help my brother, however I’m in charge of all the honey extracting, bottling and labeling. I will be involved with more of the creative side of beekeeping and leave the bees, stings, and heat to my brother.” Perfect. These guys make the perfect team and perfect business partners since both are extremely intelligent, motivated and willing to work. Another thing about these two exceptional students that I really appreciated, they did not falter for one minute during the eight hour-long lectures over two-days! Not once did I see the tired, droopy eye-lid syndrome (the one that usually attacks right after lunch). Nor did I see any restless movements, foot tapping or wondering eyes. No sighs of boredom or head-rolling, and no drowsy head bobs. I tell you what, for two young men, ages 12 and 14, I was very impressed. No way would I have ever been able to sit there for two days and not have even a single eye closure. 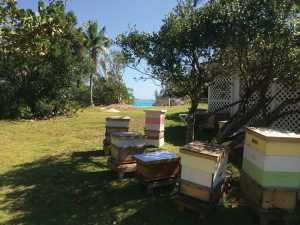 It’s been five months now since I was there, and, so far, the bees are still doing great. Some students from the classes received a free beehive, complete with bees while other students have helped with extracting and bottling honey. The jars are being sold in souvenir shops around the island to help support the beekeeping program. Something else that came out of the class; several of the students were able to fly to Georgia and attend our Young Harris Beekeeping Institute this past May. They also took the certified exam and did exceptionally well.

There are several challenges for the bees of Exuma. One is the bottlenecking of genetics, since only a few colonies from a single source were initially brought onto the island. But the more severe issue facing them would be the illegal importation of bees, which will bring along the most deadly parasite of all: Varroa. But for now, the bees are happy, disease, beetle and mite free. Yep, they’re all singing away as they’re flying about the island, possibly a song from another Disney film, which I’m sure you’ll remember . . . Be good to you and your bees!

Jennifer Berry is the Research Leader at the University of Georgia Honey Bee Lab.