I had a chance to discuss beekeeping in central South Carolina with Danny Cannon, who runs about 400 colonies and is in the Lexington (Columbia – Midlands) area of South Carolina (beetrailfarm@gmail.com).

Our Winters are mild and short in central South Carolina.  Colonies typically raise brood year around, even in November and the first part of December. Last Winter (2016-2017) we really did not have any winter, except a cold spell in March. Drones typically start flying end of February to the first of March. It is the middle of August, as I am writing this article for the October magazine, cotton is toward the end of its bloom and has done well so far this year. We are monitoring the colonies for mites in August through the December time frame. If necessary, we will treat for mites as soon as the cotton honey supers are pulled in September. We have had well-spaced rain throughout the Summer. October is the month that we start our bee’s Autumn (first frost).

Winter stores (pollen mainly) need to take us through to the first of February when red maple blooms. We also typically have a pollen dearth and the resulting “dry” brood in the later part of August through the first part of September. This dearth impacts Winter brood production. The honey stores need to take us from the September/October time frame through about the first of April when the nectar flow starts. We need to watch our honey supply very closely in March (the month prior to the nectar flow) to ensure the colonies do not starve when building up for the April through June Spring nectar flow. 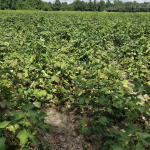 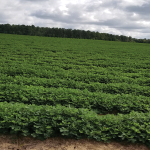 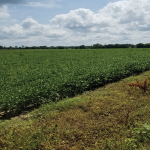 Since we have brood year around, the mite levels remain elevated in Autumn, through November and December. South Carolina is unique from the Northeast in that the Varroa mite levels remain elevated and even may keep growing in the Autumn. There is a Summer dearth if the colonies are not located near planted crops like cotton. In September through November, we feed the colonies 2:1 syrup if necessary. Feeding begins in earnest middle of September with the colonies finishing storing the syrup strategically until mid-November. This allows the brood chamber to be full without any gaps in the “honey.” A medium super full of “honey” is desired.  Our typical Fall flow from plants like asters and goldenrod is weak, with the colonies typically not being able to build up on asters and goldenrod. Danny is thinking about trapping pollen in January and February in coming years for a revenue source and feed for his bees.

The later part of November through the first part of December, treating with Oxalic Acid is recommended depending on the mite counts. Most beekeepers are now monitoring their mite levels every month, especially in the Autumn, September through December. Danny is planning on treating with Mite Away Quick Strips (MAQS) or Oxalic Acid. All extra supers are removed after the cotton flow is over around the first half of September, especially prior to treating for Varroa mites. Danny samples his 400 colonies for mites but does not monitor each colony.

Splits, a minimum of three frames, but typically five-frames, can be made in August and September. A five-frame split is preferred since it provides a “buffer” on the time when it needs to be looked at. The split queen still has enough time to build up a reasonable number of bees prior to the January cold. Danny has found splitting in a five frame NUC works best with moving to larger equipment later. After splitting, Danny will typically be up to around 500 colonies. Hive wrapping is not necessary in the Winter. If the colony has sufficient number of bees, the colony is fine.

In January, the nighttime temperatures dip into the lower 30°F to upper 20°F, with it rarely getting into the upper teens. It is in the 40°F to 50°F during the day.  In January, we typically have some days in the 60°F range. Often, we go into the colonies and check for a laying queen, food stores, and diseases making sure we reassemble the equipment in the same order. If we want to split our colonies around the first of March, we will start feeding 1:1 sugar syrup mid-January. Splitting around the first of March means our first workers hatch around mid-April.

Danny typically moves 48 hives plus supers on his flat-bed truck.  His typical beeyard in the cotton fields are 36 to 48 colonies since the fields are large (2-500 acres).  He uses four-way pallets and moves the colonies with a fork lift.  Using a fork lift is a huge labor savings. Good dependable labor is difficult to find and keep. 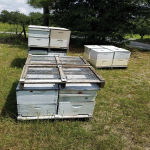 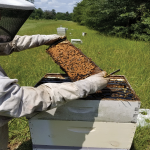 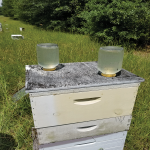 Danny moves his colonies every year. The farmers rotate their crops with the main crops being corn, cotton, soybeans, and peanuts. There is some sunflower.  Cotton provides the main Summer nectar flow with soybeans being second. Often, the farmers are planting their crops up to the field boundaries, leaving little space to place beehives. In this case, hives are typically placed on adjacent fields. Google maps is used to locate beeyards and provide driving directions. This allows Danny’s wife to know where Danny is.

We have problems with Black Widow spiders around the hives.  Hence, gloves are recommended when working the colonies.  Especially, when moving the colonies by hand.

Danny does not go down into the hive each time when inspecting, unless when lifting the top, it is warranted. Wax moths are typically a good sign of a weak colony and the need for further inspection. He typically moves small splits and other “nurse” requiring colonies back to his home yard and leaves stronger colonies in the outyards year around. Splits/NUCs are as much a part of his revenue as honey is. Danny also sells a few queens.

Mistakes made in the current year often do not show up until the following year. This may be things like – Varroa mite monitoring and treating, and determining good bee yards. Locating good beeyards is critical for honey production and hive health. Danny has “eased” into beekeeping growth to sync sales with supply. He sells honey throughout the Columbia metropolitan area. He is continually working to reduce his colony mortality rate. Survivor stock is an important component of his colony improvement operating strategy.

Danny uses screened pallets to move his bees. Two hives face in each direction on the pallet. The screening on the bottom ensures a steady airflow during the hot summers, also when moving the colonies. We need to be very careful about overheating when moving colonies.

Danny uses 23/32” covers with holes to insert feeder jars. These covers are cheap to make and last well. Since the weather is mild, we typically do not place extra brood chambers/deeps around the feeders. Unused syrup should be changed every week or so, especially in the Summer since it will ferment.

Special thanks to the following for input into the article – Danny Cannon, Steve Genta, Staci Siler.