WASHINGTON, May 13, 2015 — Losses of managed honey bee colonies were 23.1 percent for the 2014-2015 winter but summer losses exceeded winter numbers for the first time, making annual losses for the year 42.1 percent, according to preliminary results of the annual survey conducted by the Bee Informed Partnership (http://beeinformed.org ), the U.S. Department of Agriculture (USDA) and the Apiary Inspectors of America.

The winter loss improvement was about 0.6 percentage points less than the losses reported for the 2013-2014 winter. This is the second year in a row that winter losses have been noticeably lower than the nine year average winter loss of 28.7 percent.

“The winter loss numbers are more hopeful especially combined with the fact that we have not seen much sign of Colony Collapse Disorder (CCD) for several years, but such high colony losses in the summer and year-round remain very troubling,” said Jeff Pettis, a survey co-author and a senior entomologist at USDA’s Agricultural Research Service Bee Research Laboratory in Beltsville, Maryland. “If beekeepers are going to meet the growing demand for pollination services, researchers need to find better answers to the host of stresses that lead to both winter and summer colony losses.”

About two-thirds of the beekeepers responding to the survey reported losses greater than the 18.7 percent level that beekeepers reported is economically acceptable. This underlines the seriousness of the health problems stressing honey bees in this country, Pettis pointed out.

“We traditionally thought of winter losses as a more important indicator of health, because surviving the cold winter months is a crucial test for any bee colony,” said Dennis vanEngelsdorp, an assistant professor of entomology at the University of Maryland and project director for the Bee Informed Partnership. “But we now know that summer loss rates are significant too. This is especially so for commercial beekeepers, who are now losing more colonies in the summertime compared to the winter. Years ago, this was unheard of.”

Backyard beekeepers were more prone to heavy mite infestations, but we believe that is because a majority of them are not taking appropriate steps to control mites,” vanEngelsdorp said. “Commercial keepers were particularly prone to summer losses. But they typically take more aggressive action against Varroa mites, so there must be other factors at play.”

For these preliminary survey results, more than 6,100 beekeepers across the country who managed almost 400,000 colonies in October 2014, representing nearly 15.5 percent of the country’s 2.74 million colonies, responded to the survey.

This survey was largely supported by a grant from USDA’s National Institute of Food and Agriculture, which also provides the majority of funding for the Bee Informed Partnership.

A complete analysis of the survey data will be published later this year. The abstract for the analysis is at http://beeinformed.org/results-categories/winter-loss-2014-2015/.

More information about ARS honey bee health research and CCD can be found at www.ars.usda.gov/ccd. 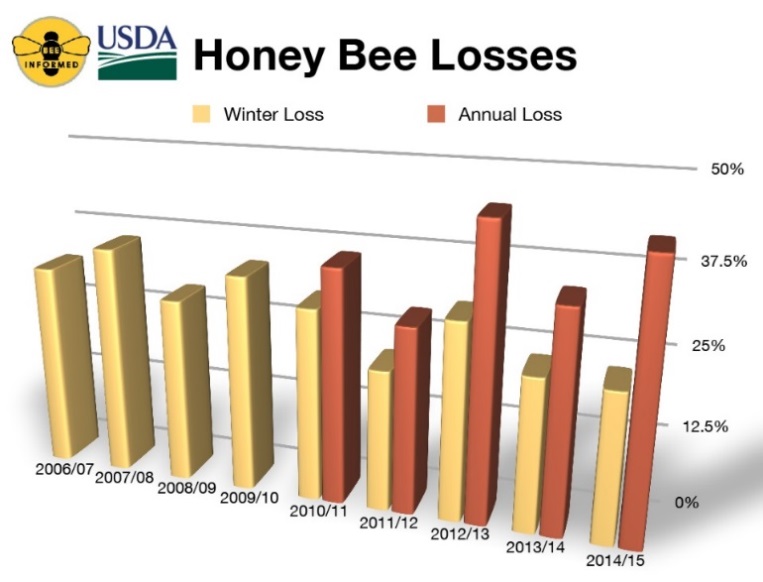