For years British beekeepers have known that the Asian predatory hornet could one day arrive on their mainland. Sure enough, a single specimen was discovered in the Tetbury area of Gloucestershire on September 17. Found by a private citizen, the hornet was positively identified by the British Bee Unit as Vespa velutina, the dreaded Asian predatory hornet. A three-mile quarantine area was immediately established and a hunt for further individuals began.  About a week later the nest was found in a conifer, 55 feet off the ground. 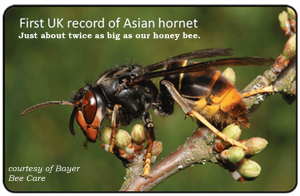 Global trade hastened the distribution of the Asian hornet from its native homeland in Southeast Asia to many parts of Europe. It was first found in France in 2004 where it apparently arrived in a shipment of pottery from China. From there it spread into Spain, Portugal, South Korea, Japan, and earlier this year it was found on the island of Alderney in the Channel Islands[1]. The hornet can easily travel in wood and wood products, plants, fruits, and cut flowers.

A threat to honey bees

In its homeland, the Asian hornet is a predator on the Asian honey bee, Apis cerana. Because they co-evolved, the Asian honey bee is adept at killing the hornet by heat balling. When a hornet is found near the nest, hundreds of bees surround the intruder while vibrating their thoracic muscles, thus raising the temperature within the ball of bees to about 115°F. After about 20 minutes, this elevated temperature kills the hornet.

The European honey bee, Apis mellifera, is not equally equipped to deal with this new threat. Although the workers surround the hornet in a similar way, they cannot raise the temperature quite as much and often resort to stinging instead [2].

Although the hornets are very territorial about their hunting grounds, as soon as a hornet snags a bee it leaves its territory and a new hornet takes its place. This switch off takes a matter of just seconds, so an afternoon of bee hunting by a large colony can wipe out thousands of bees.

Five years spent with the hornet

In southern France, beekeeper Michael Judd keeps most of his hives at an elevation of 2600 feet under a small wildflower-covered mountain near the village of St. Vallier. For reasons he does not understand, the predatory hornets have not made their way up the hillsides and his bees remain safe, at least for now. But in his backyard, where he keeps a few small hives, the hornets are vicious.

Eager to help in the fight against the hornet, Michael signed up to be part of a government-sponsored experiment to find solutions. “It ended up being no solution at all,” he said. Under the rules of the experiment, Michael lost all four of his participating hives.

Shortly after the failed experiment, Michael teamed up with another local beekeeper to work on the hornet problem. “It was the best thing that ever happened to me,” he says. Since their alliance, the two have been successful by using a combination of control techniques and timing each step to the life cycle of the hornet. “None of these measures on their own makes much difference,” he says. “However all measures together allow me to keep the hives strong.” As a result of his efforts, he has been able to harvest honey and get his colonies through the Winter.

Michael studies the hornet’s behavior throughout the season, always looking for weaknesses. “The first thing to know about the Asian hornet is that, unlike its European counterpart, it hovers in front of a beehive.” This behavior, he explains, can become the first line of defense for a beekeeper. “A badminton racket makes it really easy to swat them. I am fortunate that I can have bee hives in my garden, so my physical presence gives me the ability to visit often during the day. A more remote location would make it somewhat difficult.”

Like most wasps, the population of hornets is small in early spring, consisting mainly of overwintered queens. “They emerge in April and search for a place to make a temporary nest. This is a small nest, possibly the size of a golf ball. She lays a few eggs in there, yielding six or eight hornets.” The young hornets then search for food and a suitable place to make the main nest, usually high in a tree and up to several feet around.

Beginning in Spring Michael sets out traps. “I put out a trap made out of a plastic water bottle with a special hornet attractant provided by my local bee association. A second trap contains a mixture of white wine, apple vinegar, and cassis (a black currant liquor).” Trapping is important because catching the queens in spring reduces the chance of a large colony being formed. At this early time of year, Michael traps about 10 hornets a week. 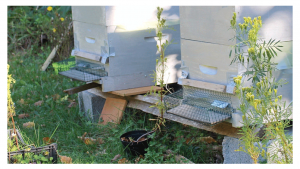 These backyard hives are each equipped with a muzzle which allows the bees to come and go while discouraging the Asian hornet. (photo by Michael Judd) 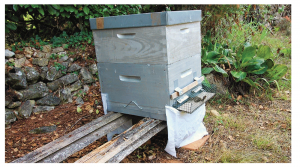 The sheet keeps the hornets from hovering below the entrance. (photo by Michael Judd)

For a while during the early Summer the hornets seem to disappear, although from time to time he sees one or two around the garden hives and has even seen bees and hornets foraging side-by-side on a single plant. But by midsummer, increasing numbers of hornets gather near the hives.

The hornet hovers in front of the hive, awaits a departing or returning bee, and catches it in midair. It takes the bee to a tree where it removes the head and wings before taking what’s left to its nest. “At this time of year the hornet will only go into the hive if the bees are very weak, not flying, and unable to attack in numbers. I have seen the bees attack and kill a hornet, so generally the hornets do not like going in the hive.” However, by mid to late September, the hornets are desperate for protein and become bolder.

“This year I noticed that the hornets, rather than hovering directly in front of the hive entrance, would hover beneath the hive. This made it impossible to swat, so I took a piece of old bed sheet and cut it to fit to the base of the hive and tall enough to get to the ground. This really seemed to annoy the hornets; they attacked the sheet but could not get to the bees. The result, for me, was they had to hover in front to the entrance where I could swat them easily. At the height of the rush, I was getting between 10 and 20 a day.”

Once the hornets begin hovering near the hive, the honey bees seem to feel trapped. “With the siege going on their flights are down to an unsustainable minimum. Without any action, the colony will simply reduce in strength until it fades away.  In my first year, I found several very small swarms in the garden, each the size of a tennis ball. I got the impression they swarmed out of total desperation. At other times the bees ate all their stores and simply died. I have read that up to about three hornets around a hive allows the bees fly normally, but any more than that forces the bees to stay inside.”

To assist his bees in the Fall, Michael reduces the size of the entrance and adds what the French call a muzzle. The muzzle is a wire contraption with holes measuring 0.5 inches square. This allows the bees to enter, but the much larger hornets are very reluctant to pass through. “This gives the bees a safe area where they can see the hovering hornet, and either go the other way or exit later.”

Behind the muzzle, Michael’s bees set up what he calls a “line of defense.” The bees line up on the floor of the muzzle which provides a protected landing strip for the bees and positions a contingent of bees ready to attack any hornet bold enough to enter the muzzle.

Asian predatory hornet colonies die at the end of the Summer. Just before the first hard freeze, the mated queens find a protected spot where they can spend the winter, often in a tree or in the ground [3]. According to Britain’s National Bee Unit, a successful overwintered queen will produce a large nest and raise as many as 350 daughter queens.

Even though the Asian predatory hornet has not yet made it to American shores, it is not too soon to plan a strategy for its arrival. A single mated female hibernating in a shipment of goods could land just about anywhere and begin her own dynasty, one more challenge for our beleaguered honey bees. BC