On Help From Above

At this time, the Board Of Directors has asked me to communicate its sense of unease about human financial matters. There is much talk about the various methods to restrain inflation and cure other economic maladies in the news. The major regulator of the human economy appears to be government, which in turn controls banks. Throughout history, institutions developed by humans, it would appear, are responsible for rampant monetary and market problems. To we honey bees, this looks very much like our situation when, whether we ask for it or not, we get “help from above.” 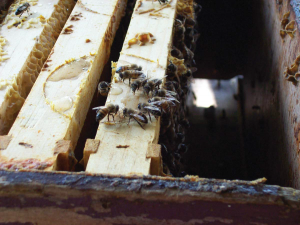 Routinely we have been fed an abundance of sugar syrup and pollen supplement by our beekeeper in early Spring. We are also jumbled about, as our household is inspected. All this stimulates us to get moving, which often is good for both us and our beekeeper. Our economy, as it were, gets a shot in the arm. We reply by beginning to rear brood. Each of us is better fed than usual this time of year, the temperature in the colony is raised, and young bees become abundant in the expectation of more brood to feed and the honey flow to come.

Because of this stimulation (help from above), however, our food consumption dramatically increases. After all, we must put a lot of reserve investment (honey and stored pollen) into sustaining this economic (population) growth. The concept is this will all be to our advantage when the honey flow begins, for we’ll be better able to take advantage of the future nectar to be produced.

As good as we feel now, however, due to this souped-up situation, the board of directors always is somehow uneasy. For even though we’re prospering as never before, they know we’re running on the ragged edge of disaster. This is a real fear. It happened last year to a colony just down the road. It’s beekeeper was informed about the value of feeding bees to stimulate them to make more honey. But after some time, the food supply was discontinued either because funds became scarce or perhaps we bees were forgotten in the rush of daily human activity.

Unfortunately, feeding was stopped just as our sisters were in high gear. The colony’s growth, however, continued and the already burgeoning population clamored for more and more food. When it became apparent that none was forthcoming, and to make matters worse, the Spring weather deteriorated into a late snowstorm, brood rearing finally came to a halt. Our sisters were forced into a frenzy of eating excess eggs and larvae to sustain themselves, and the colony’s condition continued to decline. The population starved agonizingly and slowly over the next few weeks. The last sister tucked her head into a cell never to draw it out again just as the weather cleared, bringing forth the first few flowers of Spring with their precious nectar.

This is the sad tale of what can happen when we are fed indiscriminately and unthinkingly in the Spring. Stimulative feeding is a powerful tool, but it is also a two-edged sword that can backfire with tragic results. And it seems to us that those who would manipulate the human economy, whether asked to or not, and believe that all help from above is good, might take a lesson from our experience. This situation can look awfully like a beekeeper who expects something from nothing when managing honey bees.

The board of directors has again asked me to write concerning something that’s been on its mind lately, the subject of brood disease. We abhor brood diseases, especially the dreaded American foulbrood (Paenibacillus larvae larvae).

We have seen this plague appear to erupt for no good reason in some of our sisters’ hives of late, spreading death to the “unborn” bees of the population and signaling the demise of several colonies by burning at the hands of the bee inspector.

Unfortunately for us, there appears to be little agreement among human scientists, beekeepers, regulatory agencies and others concerning how to deal with American foulbrood. Each state, for example, has a different apicultural law. These run the gamut from little inspection coupled with recommendations to feed antibiotics for prevention and control of American foulbrood, to large-scale inspection efforts tied to a rigidly-enforced policy of burning infected colonies. These disparate philosophies, along with large-scale interstate movement of honey bee colonies, contribute to spreading this brood disease, rather than minimizing infection levels. In addition, the results of new technologies, such as ethylene oxide fumigation, cannot be considered totally effective at the present time, contributing to more confusion.

We see, therefore, little to be optimistic about with regard to controlling American foulbrood in the near future. Many beekeepers continue to use antibiotics to keep the disease in check, routinely feeding these as a short cut to solving the problem. Unfortunately, the bacterium causing the disease is not killed by antibiotics; these substances simply mask the symptoms. Always waiting on the horizon are the true causes of the disease, millions of almost-impossible-to-kill spores, ready and waiting to cause another outbreak. These can only be destroyed by fire.

Therefore, we urge caution in the use of antibiotics. Indeed the persistent use of drugs for prevention of American foulbrood makes us downright uneasy. Although we insects are not mammals like you humans, a bacterium is a bacterium, and should be expected to behave in much the same manner irrespective of host. Why then should humans believe that low-level (subtherapeutic) feeding of antibiotics to themselves to prevent outbreaks of human diseases like smallpox, diptheria, and pneumonia is counterproductive, while at the same time recommending the practice in beekeeping?

Fortunately, the message has finally reached regulators that feeding antibiotics to livestock is counterproductive and in fact can be downright dangerous to humans in the bargain. The practice could produce the unintended consequence of developing bacteria resistant to antibiotics. With this in mind, the unthinking feeding of antibiotics to honey bees has now been prohibited. They are no longer available over the counter to beekeepers, who must now develop a professional relationship with a veterinarian, resulting in prescribing certain medications for specific diseases as happens in human medicine.

That innate resistance to American foulbrood is present in some parts of our population is a proven fact. Selection for “hygienic” behavior populations are continuing. This is another rationale for burning all colonies showing symptoms – attempting to effectively fix in our population the genes for resistance to this extremely problematic disease.