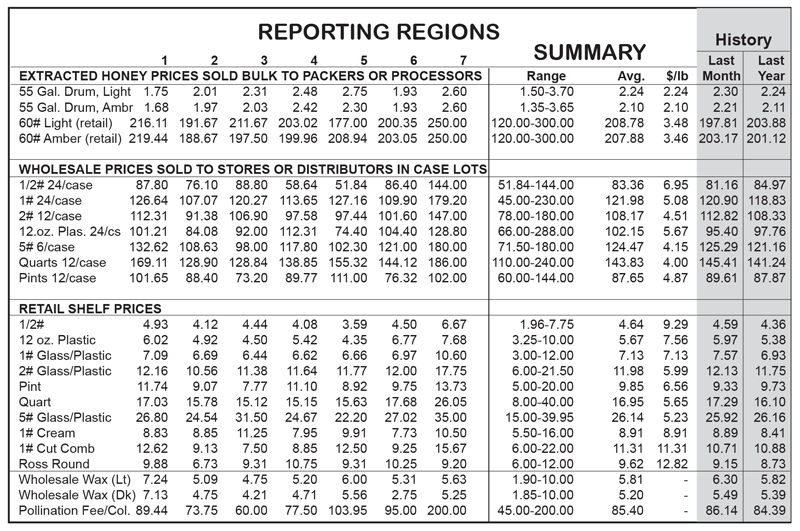 Honey prices keep coming up in discussions, so we took a look at January vs. April prices on our report. Bulk prices are absolutely flat. For wholesale, as many products are up as are down with the bigger container increasing a tad. For retail however, everything across the board is down, with the exception of cut comb. Not by much – 8 – 12% on average, which is odd, considering wholesale is up. But, that’s first quarter.

In the meantime, in very early March we polled our reporters on wintering so far – March is too early to say for sure, but it’s the first time many have had a chance to take a look, usually, except this year of course because of being mild somewhere sometime this Winter. In NE Ohio, 60s and 70s in Dec, Jan and Feb meant cleansing flights, pollen searches and lots of eating. But, at least it was warm enough to feed.

We asked about feeding last fall because Fall was so weird in so many places last year – very late in some, none in others, so how do you make up for that. 22% over all felt they didn’t need to feed with region one the highest in this category with 41%. Overall, 31% fed carbs only, 1% protein only and 35% both.

Treating  for Varroa is on most folks Fall to-do lists, and, sure enough, 76% did some sort of treatment, with a few treating twice with different compounds. Formic was most commonly used with 26% using that, 16% used oxalic acid, 19% used Apivar, 9% used Apistan, 3% used the Amitraz product, and 6% used Hopguard.

Additional protection in the form of moving to shelter or warmer climates was practiced by only a handful of our reporters. Fewer than 5% move to almonds, and even fewer overwinter in a building. But wrapping – well, some do. 21% use some sort of protection including roofing paper, plastic insulated wrap, Styrofoam sheets and the like. Not surprisingly, Region 1, the Northeast had the highest with 44% using some sort of wrap. Region 3 had none.

Because it’s been so warm, by early March almost everybody had a chance to take a peek inside. Fully 50% said things were as good as they expected, with 15 saying they were even better. Losses so far were pretty low, looking at only 5% so far, but, it’s early.

By Renée Jean rjean@willistonherald.com Not only does it appear that supporters of the Sidney, Montana Agricultural Research Service unit have fended off budget cuts…