by Herman Danenhower and Jack Rath

A century ago most honey was sold in the comb as cut comb or in wooden sections. With the tremendous interest in local and unprocessed food, the Hogg Halfcomb system provides the perfect way to appeal to the public with a clean presentation which the bees prepare by building their combs directly in a clear styrene tray. This elegant product allows the consumer to see the comb in cross section and observe how the cells slope uphill, keeping the nectar from falling out until the bees are done with the ripening and sealing the cells.

The Hogg Halfcombs are a cassette system which contain 40 cassettes or sections per super. Each individual box is coated with beeswax and is ready for the bees to start building out the comb, resulting in what we call a half comb. This allows the consumer to simply serve the honey in the container and pop the lid on and off as needed.

As with any comb honey product, the Hogg system requires a strong honey flow and very strong colonies. By splitting the hive into two colonies we are trying to discourage swarming but keep the colonies strong and motivated. This article describes an easy technique suitable to novice beekeepers. It is important to note that all beekeeping is local and beekeepers need to know their area and honey flow.

Herman Danenhower keeps bees in Kutztown, in southeast Pennsylvania. Last year he used this technique on 50 colonies, with only four hives which didn’t do well. The remaining 46 colonies produced 3000 saleable halfcombs for an average of 65 sections per hive. It was an exceptional honey year as 40 sections per hive are more typical. One advantage of this method is that the queen does not need to be located or handled. Queen excluders are used to isolate the queen and restrict her laying to a single brood box. One requirement for the modified split is the availability of early season queens since you will be creating another colony. 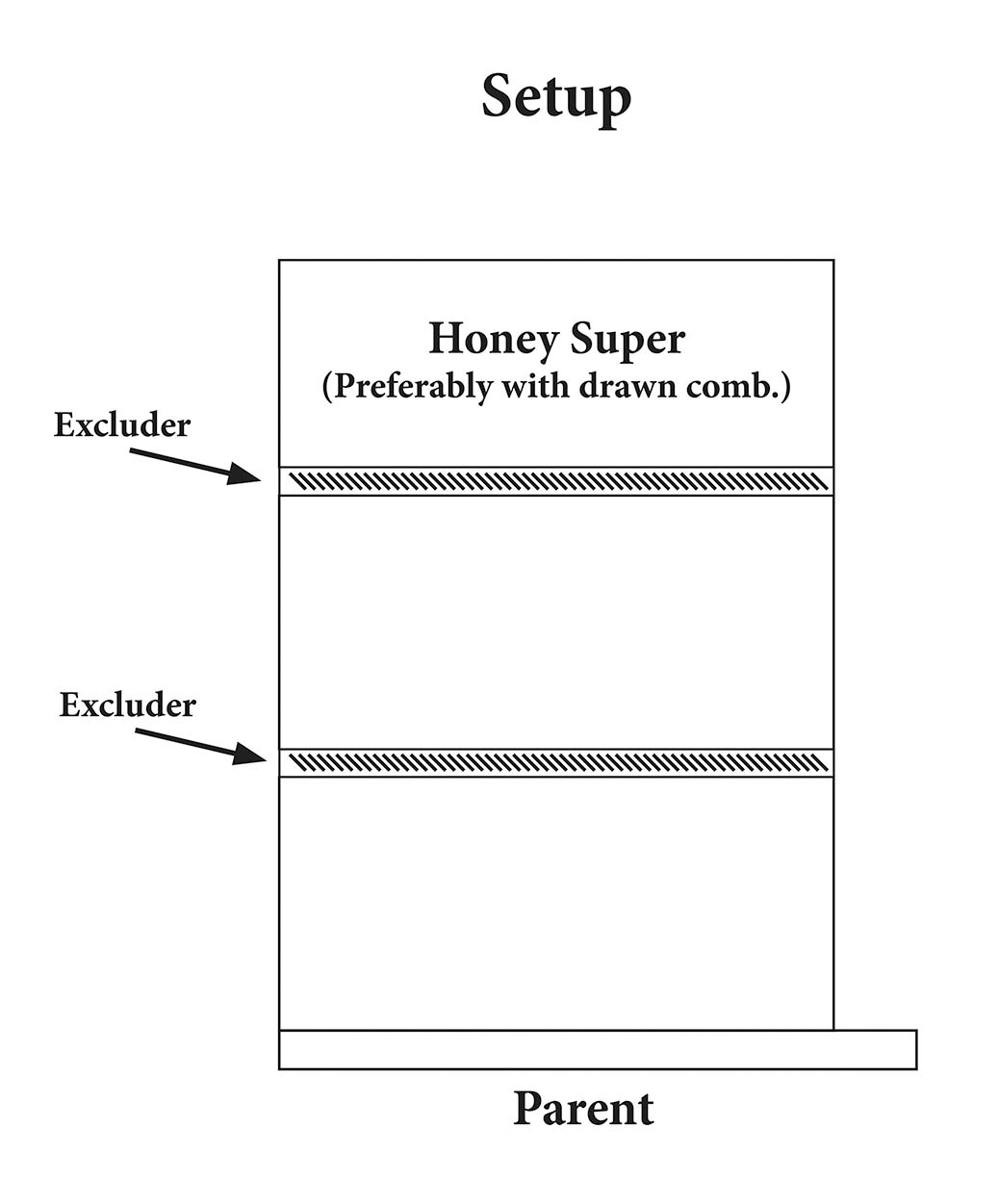 Herman prepares for comb honey production about two weeks prior to the main honey flow. In his area of PA this is mid-dandelion bloom about the 20th of April. It is essential to begin before hives prepare for swarming. Strong, overwintered colonies in two deeps are examined to see that there is brood in both the upper and lower hive bodies. These hives have not been previously reversed. If there is brood activity in the lower hive body and the colony is strong, a queen excluder is placed between the boxes. If no brood is present in the lower box, wait a week and recheck.

Another excluder is placed on top of the second hive body and a shallow or medium super with drawn comb (if possible) is placed above the second excluder. This super is added to allow room for storage of dandelion and other early honey. It also acts to discourage the bees from placing pollen in the comb honey supers. If the overwintered hive already has a super on it, that super can be left above the second excluder. In this situation it is necessary to be certain that the queen is not confined in the super. This is easily accomplished by shaking the bees off of the frames back into the hive. Note that the queen does not need to be located or handled. These preparations have accomplished two things. When the split is made it will be easy to determine where the queen is. The box with eggs and young larvae contains the queen. The other hive body only contains older brood and should be ready to accept a new queen. 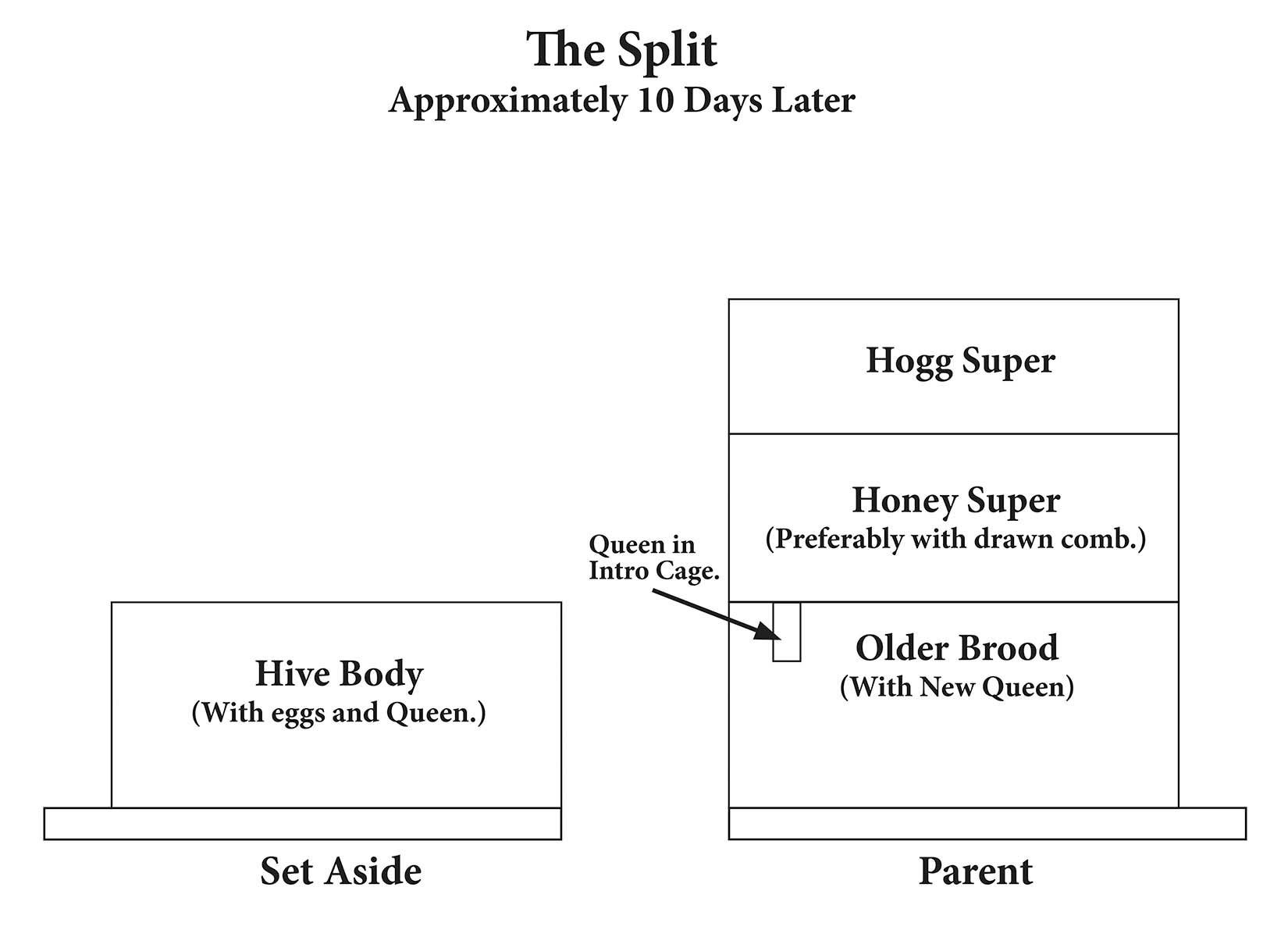 Examine the hive 10 days after the above preparation. You need to determine which hive body has the queen by looking for eggs and young larvae. Remove the honey super on top and the top excluder and examine the upper hive body for eggs and young larvae. If no eggs and larvae are found, the lower brood box is examined. The brood box with eggs and young larvae (and queen) is placed on its own bottom board and turned 180 degrees so that it faces the opposite direction. It can be adjacent to or behind the original hive. Add an inner and outer cover to this hive. We call this new hive the set aside. It has a queen, plenty of nurse bees and young brood. Most of the field bees will return to the original parent hive, strengthening it and setting it up to make comb honey.

The brood box without eggs is left on the original bottom board. We call this hive the parent. A mated queen is introduced into this box. Remove the excluder and place the honey super on top of the brood chamber. Place a Hogg Halfcomb super atop the honey super.

We have accomplished several things with these manipulations. The parent hive has no brood to care for and a strong field force. They can devote their energy to gathering honey because initially there is no brood to care for. They will move honey up into the Hogg super to make room for the new queen to lay eggs. The new queen will start to lay eggs in about five days. Since there has been a 15 day break in the brood cycle the combination of a break in the brood cycle and a new young queen will be a good deterrent to swarming.

The set aside hive should be checked in two weeks to determine if they need an additional hive body. There are many options for the set aside. It can be given a second hive body and used for extracted honey. Alternately it can be moved to a different yard during active flight hours. By doing this the field bees remain and will boost the comb honey producing colony. Alternately the hive can be reunited with the parent comb honey colony later in the season.

Hives producing comb honey should be checked weekly to see if they need a second super. A second super is given when the first super is about half full. In general completed comb honey supers should be promptly removed as the main honey flow lessens. The combs will be whiter and the product more appealing to the consumer if removed promptly. A triangle bee escape works well for comb honey removal.

All techniques for successful comb honey require strong hives, overflowing with bees. Bees are more reluctant to work in the individual cassettes, so crowding is necessary to induce them to work the individual cassettes. One method that works fairly well is to add a queen excluder and two drawn honey supers at the start of the dandelion blossom. Once the main honey flow starts, colonies that are starting to fill supers well are selected for comb honey production. Remove a partially filled extracting super, leaving one on as a buffer. Redistribute removed supers to other colonies producing extracted honey. A single Hogg super is given to each colony. The field bees that were in the honey supers will return to their hive and these strong populous colonies will often do well filling the Hogg super. Herman feels that offsetting the buffer (sliding it forward about one quarter inch to provide an additional entrance) is beneficial and will decrease the tendency for these strong hives to swarm.

An unconventional method that sometimes works very well is to hive a swarm into a single, mostly filled with honey, medium honey super. The swarm is anxious to provide an area for the queen to lay and will move the honey up into the Hogg super, filling it nicely. Again the swarm has no brood to care for and can devote their efforts to foraging and moving honey out of the brood nest. Timing is critical here. If the flow is strong they may fill a halfcomb super in a week.

Herman runs about 100 hives for extracted honey. As the honey flow is starting to wane he will sometimes put halfcomb supers on hives that might need extra room. Sometimes these hives will fill a comb honey super nicely. These colonies should be checked in about two weeks. Colonies that are doing well are allowed to continue producing comb honey. Other colonies will do little with the comb honey supers. These should be removed before they become propolized and darkened. Often there are partially filled Hogg cassettes, but these are not a loss. They are removed from the colonies and the bees are allowed to rob them out. These partially drawn (but empty of honey) cassettes can be used the following year when Herman selects strong colonies at mid-dandelion bloom. If the bees are starting to work in the bottom deep he will add two of the supers containing partially drawn combs. Bees will readily start to work these drawn halfcombs and these colonies will often do very well producing comb honey with no manipulations. Offsetting the buffer super by sliding it forward slightly is helpful for these colonies.

One technique that is possible in areas without intense honey flows is the use of eight frame Hogg supers on 10 frame equipment. The 8 frame super is placed on a strong 10 frame hive. A board is used to cover the gap. The thought is that a strong hive on a moderate flow will more readily fill the 32 combs in an 8 frame super rather than the 40 combs in a 10 frame box.

The finished halfcombs have real “eye appeal.” Herman uses different color labels to differentiate the fuller 12 ounce sections from 10 oz sections. Today much of the public needs to be reintroduced to the joys of comb honey. It is the ultimate natural and local product.

Herman Danenhower keeps bees in Kutztown Pennsylvania. He has been producing Hogg halfcombs for many years. He concentrates on comb honey.

Jack Rath, a retired dairy veterinarian is an owner at Betterbee in Greenwich, NY where he manages the overwintered nuc and queen program. Herman and Jack have enjoyed collaborating as the Hogg halfcomb has been reintroduced to beekeepers and consumers.

Here is a video of John Hogg demonstrating his method for producing halfcomb honey: John Hogg on Producing Hogg Halfcombs.