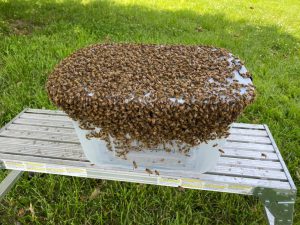 A large swarm shaken into the collection container with bees beginning to collect on the screen panels.

A decade or so ago I decided there had to be a better way to collect swarms than using an old cardboard box like I had done for many years. It seems that no matter how efficient I thought I was, I was never able to please the person who gave me a call about a swarm of bees collected from their property. I would return home thinking I had done a great job only to receive another call informing me that I left a million or so bees and I needed to come back and get them.
So, I started experimenting with different methods of shaking the swarms into various containers. Some were more efficient than others but none collected all the bees. Anyone 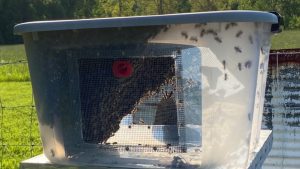 By late afternoon the bees have settled down and moved through the conical escapes into the container reforming the cluster with the queen.

who has collected a swarm knows that after the initial shaking of the bees that there are lots of confused bees flying around with many returning to the limb from whence they were originally located.

I eventually decided I needed some kind of one-way entrance on the collection box. Since I had used pollen traps to collect fresh pollen for my queen rearing cell starter/builders, I was familiar with the small red funnel shaped conical bee escapes that the traps used and decided to give them a try.
Most of my life I have not been lucky enough to come up with solutions on the first try but this was one of the very rare occasions where I did. I had been installing a #8 mesh screen panel or two on the storage tubs I used as collection boxes to help with ventilation when I 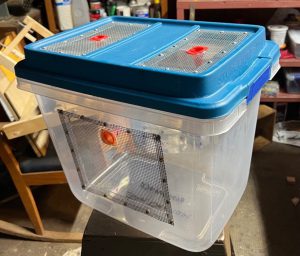 My favorite size and type of container, medium sized with latches for the lid.

transported the collected swarms to their new homes. My first inclination was to place one of the cones close to the screen which was moderately successful to enticing the flying bees inside, but some still hung out on the screen as I waited for the bees to settle down. I then moved the cones to the screen panels. This worked extremely well as I would shake the swarm in the container, replace the lid and sit the container on the ground in a shady spot as near the original spot where the swarm had collected as was possible. I would then leave the container in this spot until late afternoon or after sunset. By this time the swarm had settled down and around 99% or so of the bees had moved inside the box with the queen ready to be moved to their new home in one of my apiaries.

The key to success with these containers is to shake the bulk of the swarm, which includes the queen, into the container. To accomplish this, the swarm needs to be settled down in a tight cluster awaiting the scout bees to bring back info on a new home. 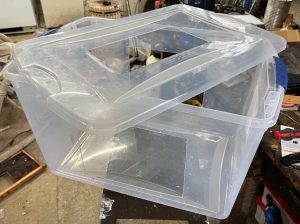 The cost of building this device is around $20, which in today’s world of beekeeping is a huge bargain. I use #8 mesh screen most of the time but have used aluminum window screen for the panels. There are many choices for containers and the one pictured in the construction photos is a 66-quart capacity which is a little larger than I normally use, but lately there has been a shortage of these storage tubs. I prefer the type that also use a latch type cover closure that keeps the lid secure during moving and transport.

Some of the tubs have holes hidden around and under the latches that bees can pass through, so be sure to check for these and plug them up. 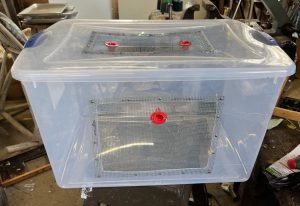 The tubs have a shelf life with some lasting considerably longer than others, so I employ reusable fasteners when attaching the screen panels so I can reuse them. My preferred fasteners are #4 x ¼” SS sheet metal screws I buy from a marine hardware supplier for about $.03 each. I have used pop rivets, hot melt glue, wire stitching, staples and cap screws and nuts, but settled on the sheet metal screws being careful not to over torque them when screwing them into the plastic containers. The ¼” screws protrude out a little inside the container so I apply a dab of silicone caulk to them to cover the sharp edges and help hold them in place. 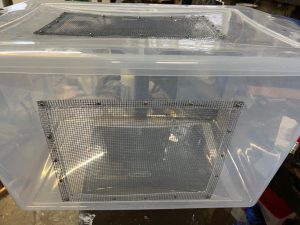 The screen panels are large enough to allow the bees to collect on them while providing ventilation but not so large that the cutout they cover jeopardizes the strength or integrity of the container. I fasten the cones to the screens with ⅜” staples from a manual stapler and bend the protruding ends over to secure the cones to the screens.
The photos of the construction are basically self-explanatory and I believe every beekeeper needs one or two of these devices. Once swarm season begins, I carry one or two of these collectors in my truck the entire season and have given away many. You can let the bees sit overnight in the container, but be advised that bees are persistant, and if you let them sit too long, they will figure out how to get back out through the escapes. 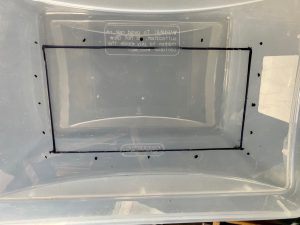 I use a template to mark the area I will cut out for the mesh panels. If you plan to pre-drill holes for fasteners, it’s advisable that you do so before cutting out the panels.

I believe it is very important for beekeepers to always answer swarm calls as it reinforces the public’s opinion that we truly care about honey bees and their welfare. This piece of equipment makes answering the call a little easier and more successful.