Ag values decline in Stanislaus Co. in the face of pandemic challenges except Almond Pollination 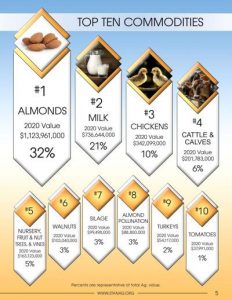 Stanislaus County agriculture had to deal with the ramifications of the pandemic last year and it was reflected in the annual agricultural report for 2020. The county experienced a slow down in the farming economy.

The Stanislaus County Board of Supervisors were presented with the Agricultural Report for 2020 on Tuesday, which showed that the value of agricultural commodities produced here last year decreased three percent from 2019 to 2020, going from $3,598,404,000 to $3,476,093,000. According to Agriculture Commission Kamaljit Bagri office, this past year brought unprecedented challenges to the agriculture industry.

“This year’s report reflects a historic pandemic year that changed markets suddenly and dramatically and created numerous challenges along the entire production chain. As lockdown orders went into effect, consumers changed eating habits as schools and restaurants closed.” Bagri said, “Locally, after emerging from a dry winter, the summer dragged into a historic fire season that burned significant rangeland on the Westside of the county in the 47-day SCU Lightning Complex fire. Additionally, we experienced a dry fall that saw little rain into mid-December.”

The report however, did point out some bright spots during the year.

“A few bright spots emerged despite these factors, such as the increase in value of livestock products including eggs and dairy, and increases in yield and value of freestone peaches, cherries and sweet potatoes. Mirroring statewide trends were decreases in dairy cattle numbers, as well as lessened field crop, processing tomato and wine grape acreage,” the report said.

Almonds remained the No. 1 crop in Stanislaus County in 2020 according to the report with a value of $1,123,961,000 which was a $105 million decrease from 2019. Almonds make up a smaller percentage of the county’s total commodity value than it did last year. In 2019, almonds represented 34 percent of the county’s total commodity value; in 2020, almonds accounted for 32 percent.

The second-highest valued commodity in 2020 was milk and it contributed even more value than it did in 2019. It was an increase in value by $128 million compared to last year. Milk accounts for 21 percent of the county’s total commodity value, while it accounted for 17 percent last year.

Unlike almond production, No. 8 on the list almond pollination saw an increase compared to last year. Pollination was valued at $$88,800,000 in 2020, increasing by $5 million, and represented three percent of the total commodity value.