A Glendale, Arizona, family tried to remove a Africanized beehive in their shed before the bees stung two adults, two children and two family dogs. 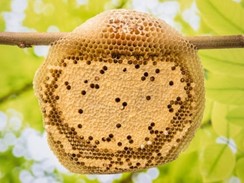 Africanized honey bee experts are urging people not to disrupt colonies after four people and two dogs in Glendale, Arizona, were stung by a swarm of Africnaized bees in their shed. (Shutterstock)

GLENDALE, AZ — An Arizona family of four was stung in an attack by a swarm of Africanized bees from their shed earlier this week. One of two adults and two children younger than 6 were hospitalized with bee stings, and the two family dogs are fighting for their lives after they also were stung in the attack outside the family’s Glendale home.

The family tried themselves to remove a beehive in their shed near Peoria and 59th avenues late Sunday afternoon, AZfamily.com and others have reported. When the Africanized bees attacked, the family called 911 and were saved by firefighters who had to blast foam onto the bees, according to another report from Newsweek.

A Glendale Fire Department spokesperson told news outlets that firefighters sprayed the foam onto the Africanized bees “for the safety of the people in the neighborhood.”

While the family is expected to recover from the bee attack wounds, the dogs remain in critical condition at a local veterinary hospital, according to the AZfamily.com report.

This marks at least the second time in three months Africanized bees have attacked residents in the Phoenix area.

Just two months ago, rescuers helped three people get away from a swarm of Africanized bees at a home in north Phoenix, KTAR and others reported. In this case as well, the bees were seen coming from a shed.

A little over a year ago, in December 2019, a swarm of Africanized bees attacked a family picking fruit in Glendale’s Sahuaro Ranch Park, which forced the park to close for the rest of the day. One man in the family was stung more than 100 times in that attack, according to reports from the time.

While all humans survived these recent attacks, disrupting an Africanized bee colony can become fatal, experts in the field have said.

Several people are killed every year due to unintentional disturbances of Africanized honey bee colonies, according to the Southern Arizona Beekeepers Association. But a large number of the attacks are preventable, the association said, urging people not to attempt to exterminate Africanized honey bees without calling a professional to take care of it.

“They need to be dealt with in very specific ways to ensure safety,” the association says on its website.

Arizona is home to a significant population of Africanized honeybees, sometimes referred to as “killer bees.” They can become highly defensive when protecting their hive, according to the Arizona Department of Agriculture.

It was not immediately clear whether the bees involved in Sunday’s attack in Glendale were Africanized honeybees.

“A good safety precaution is to maintain at least 100 feet, or the width of a four-lane highway, from any Africanized honey bee hive,” according to the department of agriculture. “It is always advisable to exercise caution with respect to all bee activity, whether in managed or feral hives.”