There is a quote attributed to Albert Einstein circulating that you may have come across: “If the bee disappeared off the face of the Earth, man would only have four years left to live.”

I have searched for the source of this quote in Einstein’s writings and have been unable to verify its authenticity. The best I have been able to discover is that the earliest this quote seems to have appeared in print was in a French pamphlet back in the 1990s. It appears that someone wanted to make a point, and since Einstein was a really smart guy and people tend to listen to what he had to say, this quote was falsely attributed to him.

Why would someone do such a thing? Well, even back in the 1990s, there were indications that pollinators were in trouble from a cocktail of threats. Pests and diseases have long been a challenge for beekeepers. Thankfully, today there are all kinds of tested and approved treatments to address pest and disease issues. Lack of adequate forage, the result of development, land fragmentation and industrial agricultural practices that rely on monoculture plantings, can be overcome with supplemental feeding. More challenging are the issues that beekeepers can’t do much to address immediately. These include: climate destabilization resulting primarily from the burning of fossil fuels; and pesticides that also happen to make the issues of pests, diseases, lack of proper nutrition and climate change worse. 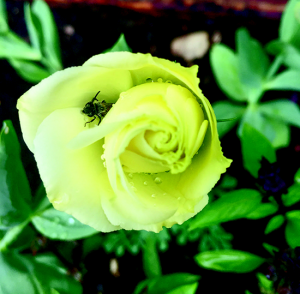 The heart felt beauty that pollinators can evoke is just one of the many gifts that will be lost if the current pattern of pollinator decline around the world is not reversed.
Alice Eckles photo

Prophesies that predict the disappearance of bees may come across as alarming and negative, but they play an important role. A prophesy can inspire a change in attitude and action that will prevent a dire prediction from coming true. In this way, scientists and the findings of solid peer-reviewed scientific inquiry takes on the role of the modern-day prophet and prophesy. And yet, despite it being obvious for over two decades that pollinators are in deep trouble, their general situation continues to decline. Sure, managed honey bee colony numbers in the U.S. have increased 10-15% or so over the past decade, but scientific indicators suggest that wild pollinators and insects are declining dramatically. (Burkle 2013) The most recent example being a German study that found a 75% decline in insect biomass in protected wildlife habitats over the past 27 years. (Hallmann 2017)

The importance of pollinators

The honey bee is usually credited with pollinating the major crops in the United States and beekeepers tend to be well aware of the importance of honey bee pollination. But often folks are not fully aware that native bees, butterflies, moths, and flies are also important pollinators of crops, sometimes even more critical than the honey bee. (Roubik 1995; Buchmann & Nabhan 1996; Klein 2007; Winfree 2007; Holzschuh 2012) So, what can we expect in our future should pollinators be in short supply? Science provides us with some clues as to what such a future may look like.

The Economics of Pollination Services

One of the first and most obvious answers to what we can expect when pollinators become scarce are economic impacts, especially in the main stay of the beekeeping industry: migratory pollination services. Pollinators provide billions of dollars in economic benefits. Unfortunately, it is difficult to assign monetary value to pollination services, given that these services are not traded in the marketplace, the value of pollinator services differ widely depending on methods, crops being pollinated, the scale of the pollination operation, and the value of money which changes constantly with shifting markets, especially during financial crises. One thing we do know is that in a world with fewer wild pollinators, demand for managed honey bees can be expected to increase. (Garibaldi 2013)

When demand goes up, it is typically accompanied by resulting price increases. Pollinator fees paid by growers have recently hit all-time highs and this trend can be expected to increase in the future. The experience of New Zealand’s beekeepers suggest that as honey bee colonies become more valuable, beekeepers and society in general can expect to incur additional costs and expenses related to bee hive theft, and related crimes. (Reuters 2017) As the cost beekeepers have to pay to maintain their hives, harvest the honey and bring it to market increase, honey prices (along with the price of beeswax and other hive products) can be expected to go up as well.

The world has already seen instances of crop yield reductions that have occurred due to pollinator scarcity. (Allen-Wardell 1998) These include well documented pollinator related reductions in blueberry production (Kevan 1977) and reports of Brazil nut declines in South America. (Mori 1992) Global instances of starvation and hunger, which are already a serious problem, can be expected to increase in a world with fewer pollinators.

Another potential impact of pollinator loss is its effect on the nutritional composition of pollinated crops. The majority of the available dietary fats, Vitamins A, C and E, and a significant amount of minerals like calcium and iron are a result of animal-pollinated crops worldwide. Given that approximately a third of our food requires non-wind pollination; we can expect that there will be less nutritious food available in a world with fewer pollinators. (Eilers 2011; Chaplin-Kramer 2014) This can be expected to aggravate the nutritional deficiencies that already exist and severely impact human health on a global scale. Since about half the human population suffers from nutritional deficiencies, (Lynch 2011; Holick 2008; Stabler 2004, Black 2003) the additional nutritional stress that a lack of pollinators will cause may prove to be catastrophic.

Vitamin and mineral supplements are not always a practical substitute for the loss or reduction of the nutrients we get from our food. Synthetically fabricated food supplements are only available to about 25% of the world’s people, primarily in developed nations. The remaining 75% of the world’s human population rely largely on pollinator dependent fruits, nuts and seeds for their vitamins and minerals.

The same is true when it comes to medicine. Most of the medicine’s used world-wide originate from botanical sources or are plant based. This is also true for 75% of the world’s people that rely on local herbs and plants for healing and health.

As noted above, the advanced, wealthy nations of the first world have the resources to help mitigate some of the damage and harm that a drastic decline in pollinator populations can be expected to produce. The wealth of the first world will undoubtedly help developed countries off-set wild pollinator loss to some extent by allowing their beekeeping industries to increase managed honey bee colony numbers when possible. It is unlikely however, that even such first world efforts can fully mitigate the loss of ecological stability that wild pollinators provide. Not only can we expect to see dramatic declines in insect eating birds, bats, fish and insects, but the decrease in the numbers and health of pollinator dependent plants that will accompany pollinator decline will have a direct impact on herbivore populations. (Buchmann & Nabhan 1996) Since the collapse of entire ecosystems on a large scale is a new experience for modern man, we really don’t know what to expect and what the full impacts of significant pollinator loss might be. An accurate assessment of changes in pollinator populations and the impact on biodiversity and ecosystems are difficult to monitor and track because of the lack of baseline data on species’ ecology and distributions. (Alan Cox 2000)

As food, medicine and areas that can support healthy pollinator populations become scarcer, human history indicates that intensified competition for these resources is likely to lead to increased conflicts and wars between nations. (Ide 2015; United Nations 2012; Kennedy 2001; Maxwell 2000) This is despite the fact that historically the world has always relied on cooperation, resource sharing and community to make survival and peace possible. The packs of wolves, flocks of birds, schools of fish and herds of buffalo found in nature are just a few examples of the natural law that says that groups cooperating together provide individuals within the group a better chance of survival than when individuals go it alone.

Confronting the Potential for Disaster

The potential impacts of pollinator decline are horrifying to contemplate. Unfortunately, there are many people that don’t want to know that truth about the state of our pollinators. They are determined to remain oblivious to the reality around us, blindly ensconsed in multiple layers of denial. All too often when beekeepers, politicians, researchers and the general public are presented with the issue of pollinator loss, they appear to listen but are taken aback and have the almost knee-jerk response of “I don’t want to hear about the problems.” Depending on their position in society, the response tends to be either, “Just tell me the solutions. Tell me what to do,” or “I have the answer. This is the solution.” A prime example of this is the continual reference to Varroa mites as the primary cause of today’s honey bee woes by so many of the beekeeping industry’s most celebrated and respected scientists and researchers.

In far too many cases, I suspect that such responses do not originate from sincere comprehension or desire to make change happen, but from a wish to evade the gravity of the situation through excuses, or meaningless, or perfunctory actions that make little difference so as to not have to look deeply into the frightening abyss of the problem. When a person takes pollinator decline seriously enough to look at all the evidence and begins to question our nation’s pesticide practices for instance, they are often labeled fear mongers, as if extreme concern over the mass die-off and extinction of our pollinators and the potential collapse of the ecosystem is somehow an inappropriate response. Such accusations suggest that the whole truth about these realities should not be told, and if they are, the bearer of bad tidings should be ashamed of themselves. Alternatively concerned beekeepers are often denigrated and labelled ignorant of the science, which we are told by the chemical industry and apologists, is settled.

At such times it is good to remember the value of fear, which is a natural human response to a threat of harm. Rather than discounting, denying or being ashamed of our fear, we should pay attention to it since its purpose is to warn us of danger and prompt us to take action to protect ourselves. We can allow fear to paralyze us, or we can use it to empower and motivate us. The idea that better nutrition, Varroa treatments, drugs for diseases, pesticide monitoring and evaluation, and attempts at genetic improvement are not solving the current state of pollinator decline and reversing colony collapse is tantamount to admitting defeat, and the idea of defeat is very un-American. Yet it is our very willingness to embrace defeat, powerlessness, failure and loss of control, that can offer “salvation,” not from colony loss and pollinator decline, but “salvation” from continuing to deny that pollinator loss is happening all around us daily despite our best efforts to date.

Remember, if we don’t change the path we are on, we will end up exactly where we are headed. The question now is, are we willing to listen to our modern day prophesies?

Ross Conrad is the author of Natural Beekeeping: Revised and Expanded Edition.