The beekeeper may be accepted into Ivy League schools and other top universities at a much higher rate. As a smaller and smaller percentage of applicants are accepted each year, beekeeping continues to be an excellent way to set yourself apart from the hundreds of thousands of seniors in high school who apply to these highly selective universities.

Unlike the 20th century, simply having good grades and high scores on the SAT or ACT are just not enough to confidently expect a thick acceptance envelope from schools like Princeton, Yale, or Harvard come decision day, and being a part of a conventional extracurricular is rapidly following a similar fate. These days, with over 40,000 high-achieving students applying for under 2,000 seats at Stanford University alone, the average applicant has to be extraordinary to even think about applying. With such a high bar for admittance, Stanford and Harvard and other elite universities could easily fill their entire school with engineering nerds and do the same for band geeks – but why would they want to? While both definitely have a distinct place in these elite settings, high school students who do more out-of-the-ordinary activities can bring even more interesting ideas and experiences to these schools. That’s where beekeepers come in.

According to several articles from admissions officers throughout the Ivy League and other top schools, an applicant who is heavily involved in an extracurricular like beekeeping shows passion, hard work, and a special connection with nature that many may lack. After all, to be invested in beekeeping does not just involve a two-hour practice or a short lunch meeting every other week. Hives require constant attention and care – missing a rehearsal for a band concert is a common occurrence, but leaving bees alone for even a week could spell disaster. The consequences of failure are also much larger: incorrectly preparing bees for a harsh winter can make many high school beekeepers backtrack on springtime promises for jarfuls of honey and have to dig into savings accounts to buy more queens in hopes of resurrecting dead hives. If a quarterback misses a throw, the cheerleaders still cheer and the game goes on.

Combining multiple academic disciplines is also something that colleges recognize. Applicants can be involved in mathematics competitions and science olympiads, but beekeeping combines this – and more – into a sort-of renaissance activity that top universities find a large amount of value in. Single-subject activities have a great place in the Ivy League, but there is something to be said for this combination.

Furthermore, the ability to solve problems in multiple academic dimensions is best seen in beekeeping. Do you need to find the best place to put a hive? Geography will help you. Want to influence the flavor of your honey in a natural way? Botany and plant biology will give you a good background for this. Meteorology is something that every beekeeper – high school student or not – should stay up-to-date with in order to be prepared for surprise floods or droughts that may happen throughout the year. All of these problems – and their solutions – easily transfer to college-level classes, where students with extensive backgrounds in natural processes can more adequately understand complex topics in classes like Organic Chemistry or Molecular Biology and can contribute interesting and diverse ideas to class discussions. Beekeeping adds practical, quantifiable experience that high test scores can not always show.

Spanish teacher at Redlands East Valley High School in Redlands, California, and avid beekeeper Michael Celano agrees: “Being a beekeeper shows college admissions officers that a student has the drive to succeed despite terrible odds: the fear of being stung [and] the tremendous disappointment of losing colonies to mites, pesticides, and Colony Collapse Disorder [show] that the student is a well-rounded individual – that he or she doesn’t just spend the whole day studying.” Though they may not be common in high school due to expensive start-up costs and a high learning curve, students who choose to be amateur apiarists can find success both in the classroom and in the admissions room.

This is all evident in senior Alex Kristoffersen’s college applications journey this year. “Admissions officers get tired of the same cliches in college essays,” says the Redlands East Valley High School valedictorian, ‘not to say writing about the classic topics won’t work – a genuine essay will be fantastic no matter what the topic – but writing about beekeeping was a good way for me to express to the reader how I act on curiosity and overcome challenges. That being said, I didn’t start beekeeping to fill my college application. I started because of honest interest, which made it easy to express that passion in my writing. Admissions officers can sniff out ill motive pretty easily, I think.” In addition to balancing Advanced Placement classes, his work as a coach for the local swim team, and his responsibilities as the president of his school’s engineering club, Alex has enjoyed beekeeping throughout his high school career.

“To be honest, I started solely for the honey. I still love the honey, but what keeps me still beekeeping is the constant challenge,” he says. “In beekeeping, it’s all about staying calm and going slow. It gets a little hard when there’s hundreds of bees around your head. I love the challenge and the rush you get knowing that only a bit of fabric is protecting you from all that danger! Around two years into the hobby, I’ve gotten pretty good at reading the bees. Nothing too scary happens very often anymore, but things can still be pretty tense!” 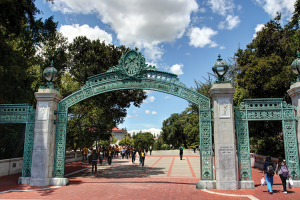 Thanks to his investment in an unconventional activity, Alex will be attending the University of California at Berkeley and will study in the prestigious Electrical Engineering and Computer Science program – something that less than 10% of applicants can have the privilege of saying.

As Alex’s college application journey shows, colleges are interested in keeping beekeeping alive in the younger generations – especially in the face of major environmental issues like Colony Collapse Disorder and climate change. In addition to recruiting beekeepers, top-level universities can also foster an interest in beekeeping by way of their endowment. Harvey Mudd College, the 12th best national liberal arts college in the United States according to USNews.com and the second best college in the nation for return on investment according to Payscale’s 2017 College ROI Report, even has its very own Bee Lab. Through senior theses, research publications and captivating experiments, the Bee Lab introduces new students to the world of bees and provides an almost limitless sandbox for seasoned veterans and lovers of honey alike. This is far from unique: dozens of universities across the continent have entire departments dedicated to apiculture and insect behavior, from Montana State University to New Mexico State University to the University of California at Davis. The University of California at Berkeley has an Urban Bee Lab which Alex looks forward to working with. “When I toured last year, I made note that bees would be perfect there, so I can’t wait to check that out,” he says. “Besides the bees, I’m super excited for everything Berkeley has to offer me as a student of the College of Engineering. They have a maker-space called the Jacobs Institute that I can’t wait to dump some serious time there.”

As for when Alex moves away, “I haven’t decided yet. I’m hoping that if I set them up well enough during the Summer, my hives will be healthy be the time I’m back for vacation. But who knows, maybe I could give them to another student who wants to get into beekeeping too!” For the next group of high school students who hope for a similar outcome in regards to the college admissions process, Alex’s absence leaves a wide open opportunity to become amateur beekeepers and improve their college admissions chances in the process.

However, as much as beekeeping may help convince colleges to accept you, hard classes, good grades, and high standardized test scores are still absolutely necessary to be competitive in the admissions process. Just like being a stellar trumpet player or the captain of a nationally ranked volleyball team cannot fully make up for an F in AP Chemistry or an extremely low score on the ACT, simply being a beekeeper cannot guarantee you a spot at your Ivy League school of choice. Such an extracurricular should be a complement to an already accomplished and interesting resume. While just grades and standardized test scores sufficed in the 70s and 80s, they are now just a way to see if applicants can succeed at a certain university, and not if they deserve to go. In a more bee-friendly way, those two things are the frames in a beehive; the honey is the extracurricular achievement.

All in all, if high school beekeepers are academically talented and write good essays, the results can be very gratifying. With hard work, beekeeping can bring two amazing gifts next Fall: tons of delicious honey and plenty of acceptance letters!

By Charmayne Hefley, Associate Editor, California Ag Today Wonderful Branding A catchy brand can make or break a product, and the agriculture industry has…