Vibrations and sounds, collectively called vibroacoustics, play significant roles in intracolony communication in honey bees (Hunt and Richard 2013). For many years it was thought that bees were totally deaf to airborne vibrations (sound) (Goodman 2003). However, it has been shown that honey bees can detect the air-particle movements associated with airborne sounds (Towne and Kirchner 1989), and they do so using Johnston’s organ, a chorodontal organ in the antennal pedicel (Dreller and Kirchner 1993a). Chordotonal organs are a category of mechanoreceptor sensilla that respond to stimuli ranging from gross motor movements to sound and convert these to neural impulses (Field and Matheson 1998). Three major types of chordotonal organs include: the tympanal organ, Johnston’s organ and subgenual organ. Tympanal organs are absent in Hymenoptera (bees, wasps and ants).

Bees generate sound not only through movement of their wings but also with their thoracic muscles. Although they use these muscles to move their wings, they can uncouple their wings to produce heat and generate acoustic signals. Travelling sound waves have both pressure and particle movement components. Sound waves are measured by their frequency in Hertz (Hz), or cycles per second. The frequency of sound waves is heard as pitch; a higher wave frequency creates a higher pitch. Honey bees produce many frequencies of vibration and sound – from less than 10 to more than 1000 Hz. So far it has been shown that they can detect sound frequencies up to about 500 Hz (McNeil 2015).

The belief that bees were completely deaf was refuted by a series of experiments following the discovery that sound signals are emitted by dancing bees. Towne and Kirchner (1989) trained bees to associate a sound with a weak electric shock. Bees learned to avoid the shock by leaving a feeder when a sound signal was given. It was thus concluded that they could hear airborne sound. More recently another training paradigm, in which the bees were trained to turn right or left as they entered a feeder, the correct way being toward the sound source, was used to determine the frequency range and amplitude thresholds of hearing in bees (Kirchner et al. 1991). It turned out that bees hear airborne sounds of low frequencies up to 500 Hz with sufficient sensitivity to pick up the sounds of a dancing nestmate (Kirchner 1993). The same training technique was used to find out which sensory structures are used to pick up the sound signals produced by dancing bees (Dreller and Kirchner 1993a). Sensory structures suitable for perceiving near field sound signals are hair sensilla or the antennae. Bees which had learned to respond to sound were then manipulated by removing one or both antennae, or fixing a certain joint in the antenna or removing sensory hairs on the head (Kirchner 1993). These behavioral experiments revealed that the sounds are picked up by the Johnston’s organ located within the antennae.

The Johnston’s organs found within the honey bees antennae (Figure 1A) are a collection of sensory cells that are sensitive to vibration. They are found in the second segment (pedicel) of the antennae, and each detects minute motion of the end segment (flagellum). The antennal flagella can detect movement to 20 nm and are sensitive to low intensity stimuli of 265-350 Hz. The Johnston organ consists of over 300 nerve cells (scolopidia), arrayed in a bowl shape. They convert mechanical vibrations into nerve impulses relayed to the brain (McNeil 2015). 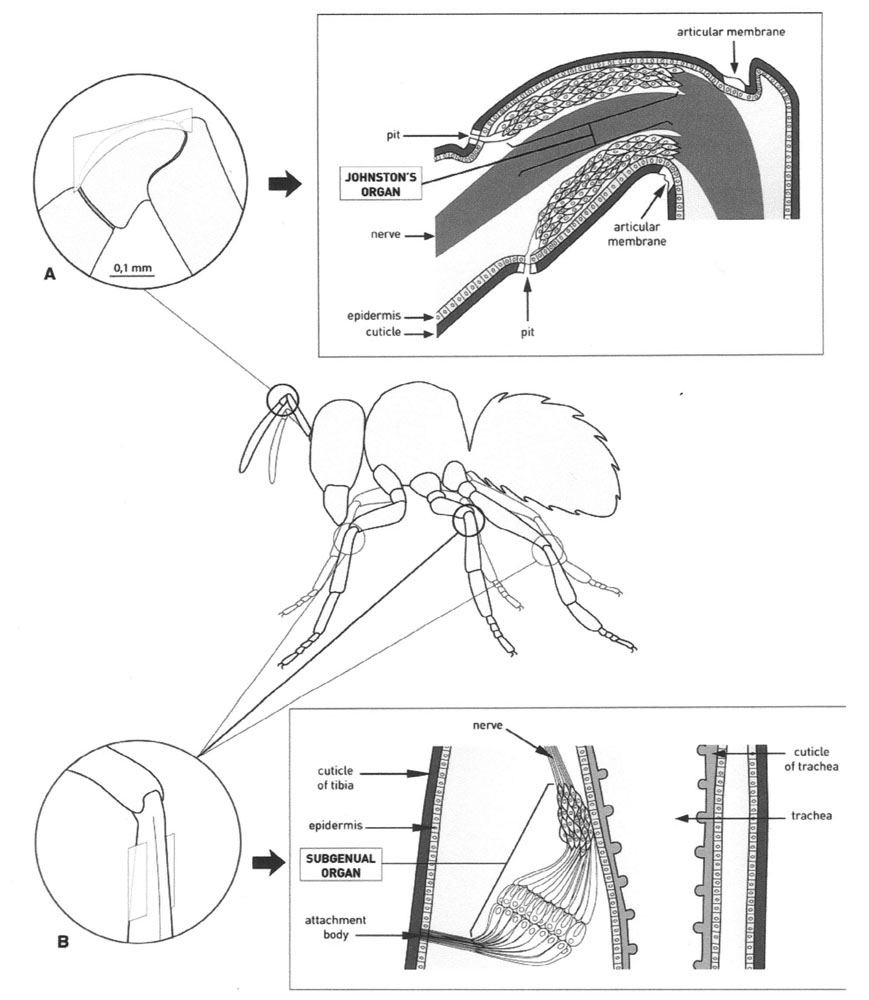 Figure 1 – The Johnston’s organ (A) and subgenual organ (B) are the primary receptors for vibroacoustic signals (sound). Hunt and Richard (2013)

Air-particle oscillations (sound) cause the long, thin antennal flagellum to vibrate, and the Johnston’s organ registers these movements (Towne 1994). This sensory system, which is sensitive to air vibrations up to about 500 Hz, is well suited to detect the 200-300 Hz sounds produced by dancing bees (Kirchner et al. 1991; Kirchner 1994), and this is the only natural context, other than its possible use in the control of flight (Heran 1959 in Towne 1994), in which the sensory system is known to be used (Dreller and Kirchner 1993b).

The acoustic near field close to honey bees performing the wagging dance was investigated with pairs of small, matched microphones placed in various positions around the dancing bees (Michelsen et al. 1987). The dance ‘sounds’ are produced by the wings, which act as an asymmetrical dipole emitter. Close to the abdomen, the ‘sound’ pressures in the air spaces above and below the plane of the wings are totally out of phase. A zone of very intense acoustical short-circuiting exists close to the edges of the wings, where pressure gradients of about 1 Pa/mm are observed in the dorso-ventral direction (perpendicular to the plane of the wings). The pressure gradients drive air movements with velocity amplitudes up to about 1 m/s. The pressure gradients are much smaller in directions radially away from the bee and decrease rapidly with increasing distance from the wings. The ‘sound’ pressure detected by a stationary probe at one side of the bee is strongly modulated at 12-13 Hz as a result of the bee’s side-to-side wagging. Surprisingly little ‘sound’ is found near the dancer’s head. The positions of the follower bees reflect the properties of the acoustic field: the follower bees place their antennae in the zone of maximum acoustical short-circuiting where the air particle movements are most intense. These observations suggest 1) how follower bees can avoid mixing up the messages carried by the dance ‘sounds’ when two or more bees are dancing only a few cm apart and 2) how the followers might extract information about a dancer’s spatial orientation from the acoustic near field she produces.

Honey bee foragers use a “waggle dance” to inform nestmates about directions and distance to locations of attractive food. The sound and air flows generated by the dancer’s wing and abdominal vibrations have been implicated as important cues, but the decoding mechanisms for these dance messages are poorly understood. To understand the neural mechanisms of honey bee dance communication, Tsujiuchi et al. (2007) analyzed the anatomy of antenna and Johnston’s organ (JO) in the antenna, as well as the mechanical and neural response characteristics of antenna and JO to acoustic stimuli, respectively. The honey bee Johnston’s organ consists of about 300-320 scolopidia connected with about 48 cuticular “knobs” around the circumference of the pedicel. Each scolopidium contains bipolar sensory neurons with both type I and II cilia. The mechanical sensitivities of the antennal flagellum are specifically high in response to low but not high intensity stimuli of 265-350 Hz frequencies.

During the waggle phase, the dancer moves her body in 15 Hz waggling motions while vibrating her wings in short pulses (20 ms duration at frequencies ranging from 200 to 300 Hz (Michelsen et al. 1987; Spangler 1991). These wing vibrations generate weak near-field sounds that dance followers may be able to detect when they are close to the waggle dancer (Michelsen 1993).

During honey bee forager recruitment dances, a dancing bee waggles her abdomen and vibrates her wings and in doing so simultaneously generates substrate-borne vibrations, near field sounds, and jets of air (Michelsen et al. 1986a; Dreller and Kirchner 1993a; Michelsen 2003), all of which can transmit information from the dancer to follower bees. Waggles enhance the transmission of thoracic vibrations to the substrate (Tautz et al. 1996), with maximum signal transfer when the thorax is fully laterally displaced during a waggle (Hunt and Richard 2013). Varied postures of bee’s legs perceive both horizontal and vertical components of the substrate vibrations (Sandeman et al. 1996; Rohrseitz and Kilpinen 1997), and substrate vibrations are translated into neural impulses via the subgenual organ (Kilpinen and Storm 1997). Waggle dances occur more frequently on open cells in honeycomb than on capped cells, and dances on open cells more strongly attract inactive potential foragers, indicating that substrate properties are a component of signal transmission (Tautz 1996). Even though substrate vibrations during waggle dancing transmit information from the dancing bee to bees attending the dance, the substrate vibrations may not provide specific information about the velocity and direction of the dancer during the waggle run (Nieh and Tautz 2000).

Intraspecific communication involves several types of vibration signals transmitted through the comb. The best known signals are the tooting and quacking signals of the honey bee queen and the stop signal of the worker bees (Nieh 1993). These signals all have fundamental frequencies in the range 200-500 Hz, but different temporal structure (Michelsen et al. 1986ab).