The ability of worker bees to recognize brood, its stage of development, sex and caste, is a prerequisite for appropriate brood care and larval feeding (Free 1987). Workers can distinguish the larvae of all three castes, since drone, worker and queen larvae receive food with different compositions (Shuel and Dixon 1959). In addition, nurse bees can also recognize the age of larvae, as the feeding behavior and composition of larval food vary with larval age (Shuel and Dixon 1959; Thrasyvoulou et al. 1983; Brouwers 1984; Beetsma 1985; Brouwers et al. 1987). Workers also seem to determine the food requirement of larvae during their inspections. 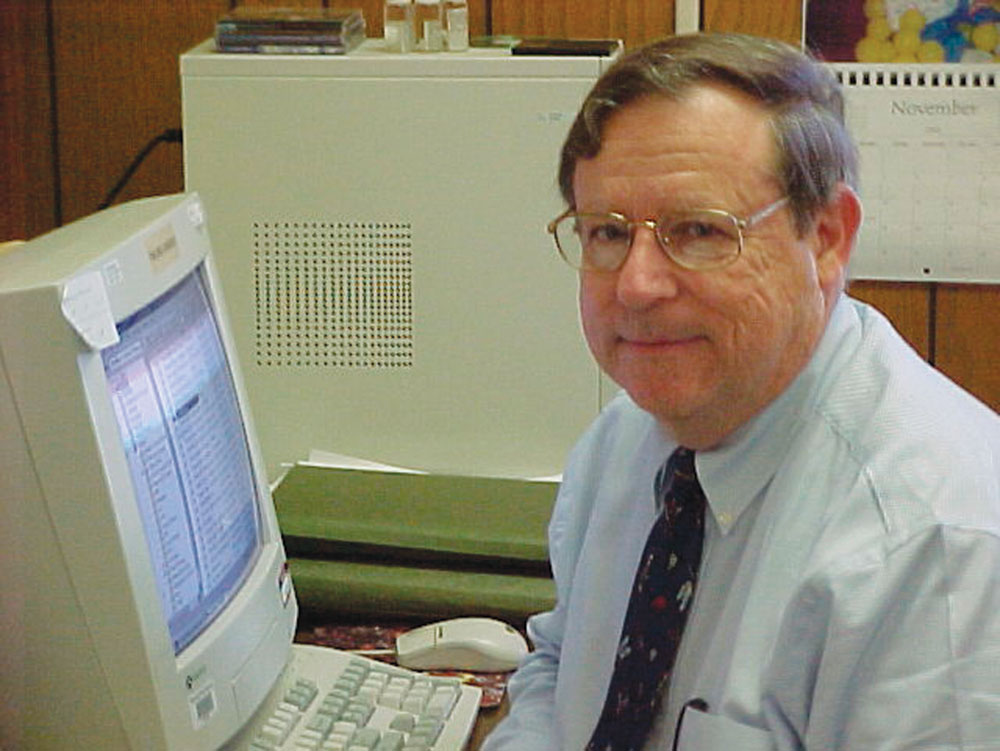 Young bees begin feeding brood when they are about three to 13 days old. Although workers beyond this age are still capable of feeding larvae to a limited extent, most of them begin other activities at about this age. Nurse bees begin to visit cells as soon as eggs are laid and continue at frequent intervals throughout the duration of egg and larval stages (Gary 1992). Some of these visits are very short (at most about two to three seconds), but in others the larvae and the brood are examined longer with the antennae, the bee leaving the cell only after 10 or even 20 seconds. Each actual feeding is preceded by such an “examination.” The time taken for one feeding (including inspection) is variable. Usually it is from one-half to two minutes; in exceptional cases even three minutes. During the first two days after hatching, nurse bees continuously supply the tiny larvae with far more food than can be consumed, so that the larvae appear to float in the milky-white food. During the third day a larva in a worker cell continues to receive food, but consumes it as fast as it is deposited by the nurse bees. During the eight-day period from the laying of an egg until the full-grown larva is enclosed in the capped cell, (Nelson et al. 1924) found that nurse bees visit individual larvae approximately 1,300 times daily, or more than 10,000 times throughout larval development. On the last day before the cell is capped, they visit it nearly 3,000 times, spending a total of approximately four-and-three-quarter hours within the cell. Lindauer (1953) found that the time that 2,785 nurse bees spent in rearing one larva from the time the egg was laid to capping of the cell was 10 hours, 16 minutes and eight seconds.

The visitation pattern by worker honey bees to cells in the brood nest was monitored on an artificially created brood pattern consisting of about one-fourth brood cells evenly distributed among empty cells. The majority (63%) of the observed workers selectively entered larval cells. In contrast, some workers avoided egg cells when presented a choice of egg versus empty cells. The results suggest that larvae produce a general signal indicating their presence to worker bees. Eggs also seem to produce a signal, which is perceived to be different from the one from larvae (Huang and Otis 1991a).

Honey bee larvae are frequently inspected and sometimes, provided with food by adult workers, but the stimuli that elicit the important task of food provisioning have not been fully investigated. Larvae with their food experimentally deprived received more frequent inspection and feeding visits from nurse bees than normally fed larvae, suggesting that there could be a “hunger signal” (Huang and Otis 1991b). Food-deprived larvae with artificially supplied larval food received the same rate of feeding visits from nurse bees as did normally fed larvae but still received more inspection visits. These results suggest that stimuli eliciting feeding are different from those for inspection. They also support the hypothesis that worker bees deposit food in a larval cell only when the quantity of food is below a certain minimum threshold that is perceived during larval inspections. Since these studies, brood pheromones have been discovered and chemically characterized. 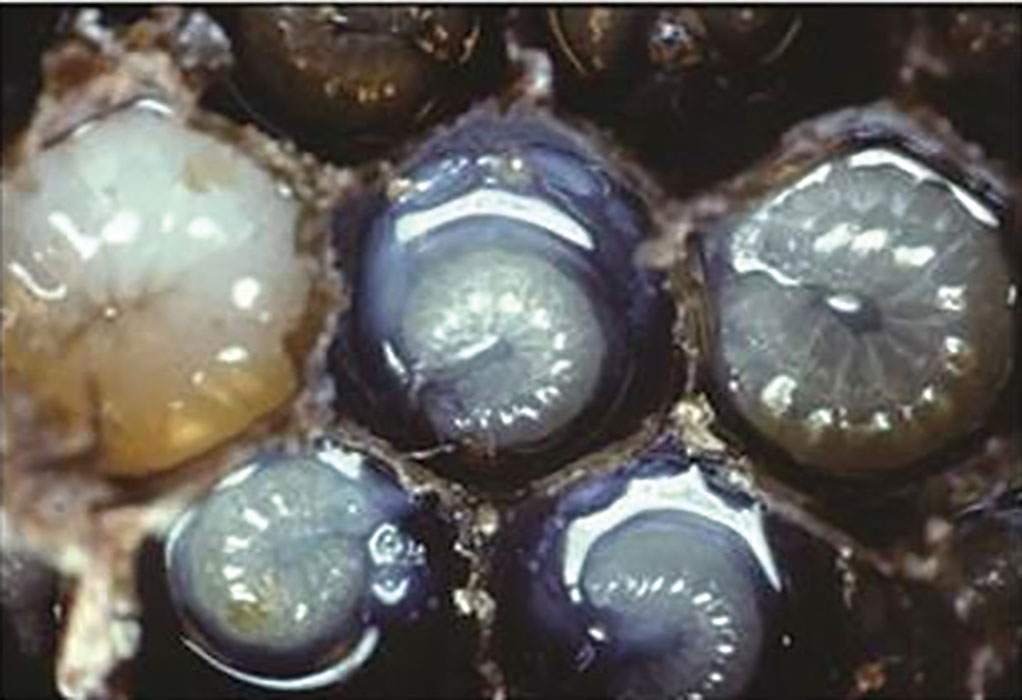 Shpigler and Robinson (2014) conducted numerous experiments to better understand nursing behavior. In their first experiment they examined the worker response to a queen cell with a larva versus an empty queen cell to determine if the bees showed a specific response to the larva. Bees made significantly more visits and spent significantly more time in the queen cells that contained larvae compared with empty queen cells. Secondly, they compared the response of workers to a queen cell with a larva versus royal jelly. Bees made significantly more visits and spent more time in queen cells with a larva compared with those with royal jelly. Bees capped nine out of 17 queen larva cells but none of the 17 cells with only royal jelly. None of the capped larvae developed into mature queens, presumably because the removal of royal jelly to set the experiment up left them with an insufficient reserve that could not be replaced by the bees in the group. In a third experiment they quantified the success of brood care in the laboratory assay by determining the effect of group size on brood care and the minimum number of bees needed for successful growth of the larva. Queen cells with four-day-old larvae were introduced to experimental groups of three different sizes: eight bees, one bee or 0 bees. The honey bee queen larva goes into the pre-pupal stage after it spins a cocoon at age of five days, while the workers seal the cell with wax (Laidlaw and Page 1997). Each larva was monitored to see if it spun a cocoon and had its cell capped with beeswax by the workers, died inside the cell, or died after falling out of the queen cell onto the dish bottom during the first 24 hour period (larvae given to zero bees could not be capped, but still could spin a cocoon). The emergence of adult queens from the cells was monitored for seven to nine days. Queen larvae fared significantly better in all three measures (spinning of cocoon, capping of cell, emergence of queen) when placed in eight-bee groups compared with dishes with zero adult bees. Eight-bee groups also had higher proportions of pupae with cocoons, pupae in cells that were capped and queens emerging compared with one-bee groups. Surprisingly, the proportions of queens emerging from cells containing pupae with cocoons or of queens emerging from cells containing pupae in cells that were capped were similar for the eight-and one-bee groups. Although the presence of one adult worker is very important in ensuring that a queen larva spins its cocoon safely without falling out of its vertically oriented cell; some queen larvae are able to seal themselves in cells without the assistance of adult workers. They also found that single workers can nurse, cap and successfully rear a queen larva, but groups of bees are more effective.

Worker honey bees rear a new queen by providing her with a larger cell in which to develop and a large amount of richer food (royal jelly). Royal jelly and worker jelly (fed to developing worker larvae) differ in terms of sugar, vitamin, protein and nucleotide composition. He et al. (2014) examined whether workers attending queen and worker larvae are separate specialized sub-castes of the nurse bees. They collected nurse bees attending queen larvae (AQL) and worker larvae (AWL) and compared gene expression profiles of hypopharyngeal gland tissues. Significant differences in gene expression were found that included a disproportionate number of genes involved in glandular secretion and royal jelly synthesis. However, behavioral observations showed that there were not two entirely distinct populations. Nurse workers were observed attending both worker larvae and queen larvae, and there was no evidence of a specialized group of workers that preferentially or exclusively attended developing queens. Nevertheless, AQL attended larvae more frequently compared to AWL, suggesting that nurses sampled attending queen larvae may have been the most active nurses. 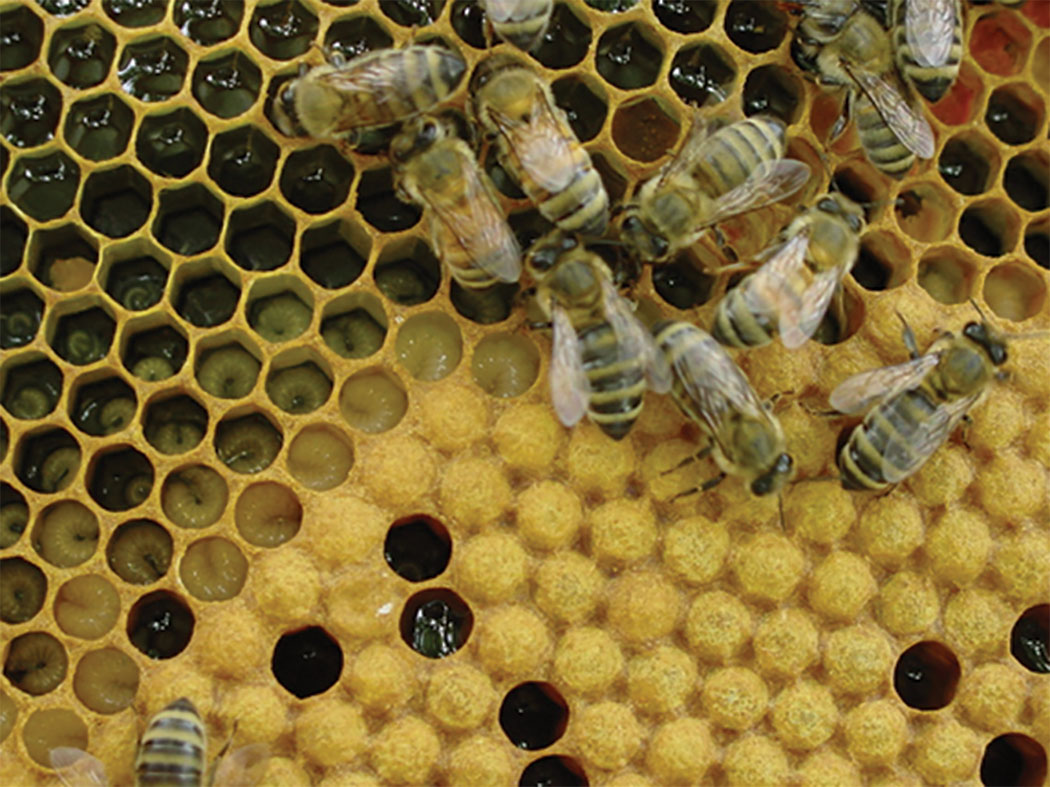 Older larvae eat as fast as they are fed so food does not accumulate in the cell.

The honey bee colony has a reproductive division of labor: the queen is the primary egg-layer in a colony and has more than 200 ovarian filaments (ovarioles), whereas a worker normally does not reproduce and has fewer than 20 ovarioles. Cooperation between nurse bee feeding behavior and larval developmental programming results in the differentiation of queens and workers along with variation in ovariole number, body mass and foraging behavior. Wang et al. (2014) tested how nurse bees affect ovariole number and body mass in workers, and how larvae respond to food delivery during different larval life stages. Their findings demonstrated that nurses control larval growth and ovariole number by temporally manipulating food delivery and that the response of larvae to food differs with larval life stage and genotype. Body mass of larvae was more sensitive to nutrition during the first to the fourth instar (L1-L4), whereas ovariole number was more sensitive during the fifth instar (L5). Overall, they were able to decouple the nurse feeding program and the larval development program in honey bees. They concluded that nurse feeding behavior during L5 is critical for modulating ovariole number in workers. 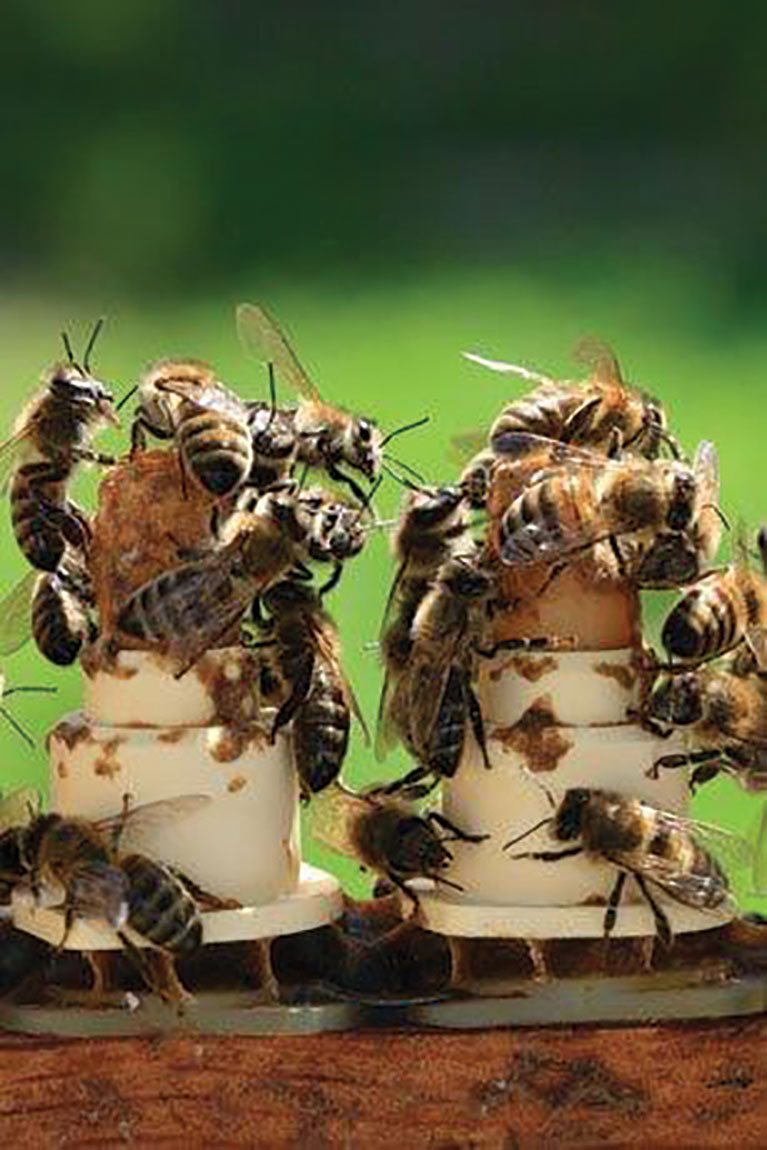 Queen larvae need a diet of Royal Jelly for the entire duration of their cell life.

The flow of jelly from 100 nurse bees to the members of two normal-sized colonies was measured one night. To follow the flow, nurses were injected with 14C-phenylalanine. They incorporated this label into the protein of their hypopharyngeal (brood food) glands and their own body protein. When they were allowed trophallactic contacts during the investigation period a loss of label and a shift away from the abdomen was observed, indicating protein synthesis in the hypopharyngeal glands from previously stored protein. Very young larvae were fed less frequently than older ones. Younger workers received larger amounts of jelly than older ones, but considerable amounts were given to foragers. Drones behaved similarly. Between one-third and one-half of the distributed jelly was given to imagines (fully developed adult stage); 10% and 16% of all workers received radioactive jelly from 100 nurses in the two colonies during one night. Thus, jelly is a very important food for adult bees. There was a remarkable exchange of label within the class of nurses themselves that is interpreted as communication within the social system (Crailsheim 1992).

Wegener et al. (2009) investigated the physiological consequences of prolonged nursing for both the nurses and the brood they rear. Brood was reared in groups of colonies with either a normal age structure or with moderately over-aged workers. The hemolymph concentrations of total protein and vitellogenin, the development of mandibular and hypopharyngeal glands, and the activity of a-glucosidase in the hypopharyngeal glands of nurses from these groups of colonies were compared. Their results indicate that while over-aged nurses remain capable of producing brood food, they are not functionally equivalent to young nurses. The partial degeneration of the mandibular glands normally occurring at the end of the nursing period cannot be prevented by prolonged nursing.

References
Asencot, M. and Y. Lensky 1976. The effect of sugars and juvenile hormone on the differentiation of the female honeybee larvae (Apis mellifera L.) to queens. Life Sci. 18: 693-700.

Asencot, M. and Y. Lensky 1985. The phagostimulatory effect of sugars on the induction of “queenliness” in female honeybee (Apis mellifera L.) larvae. Comp. Biochem. Physiol. A 81: 203-208.

Brouwers, E.V.M., R. Ebert, and J. Beetsma 1987. Behaviourial and physiological aspects of nurse bees in relation to the composition of larval food during caste differentiation in the honeybee. J. Apic. Res. 26: 11-17.