Protein (pollen) consumption is necessary for the glands to develop fully and to produce high quality protein-rich jelly for the brood.

Pollen consumption by adult workers is necessary for proper post-emergence gland development and growth of internal structures during the first eight to 10 days of life but after that is not essential unless older workers begin to produce brood food and feed larvae (Winston 1987). Hypopharyngeal or brood-food glands are undeveloped when bees emerge from their cells, but within six to 12 days they are mature and active. Nurse bees have the most functional hypopharyngeal glands, as it is their principal duty to feed the brood. Protein (pollen) consumption is necessary for the glands to develop fully and to produce high quality protein-rich jelly for the brood.

To determine when bees begin to consume pollen, newly emerged bees were caged on small combs of pollen and sampled every two hours for 72 hours (Hagedorn and Moeller 1967). By the time they were 12 hours old, 50% of the bees had consumed a small amount of pollen. The rate of consumption remained at a fairly constant low level until the bees were 40 hours old, after which they began to consume larger amounts of pollen.

Dietz (1969) looked at pollen consumption under both laboratory and hive conditions and found significant differences in the early hours of emergence. Pollen was already present in 17% of incubator bees after one hour and in 25% after two hours. Pollen consumption was negligible in the first two hours under hive conditions. Continuous pollen consumption in roughly 85% of bees begins about six hours after emergence under laboratory conditions, and about 10 hours under hive conditions. The percentage of bees feeding on pollen in these two groups is almost identical at the end of the 12-hour test period. Pollen grains are already effectively removed from the honey stomach in very young bees by the filtering action of the proventriculus. Movement of pollen into the anterior intestines and recta of incubator and hive bees is negligible in the first 12 hours after emergence.

The pollen content of the gastrointestinal tract of honey bee workers was investigated in the morning before the beginning of flight activity. It was low in young bees, largest in about nine-day-old nurse bees and declined to minimal amounts in foragers. In all age groups, the amount of pollen in the honey stomach (crop) was small but that in the midgut was representative of the age-related status of the bee in the system of division of labor. It could be correlated with the developmental stage of the hypopharyngeal glands and to the known content of proteolytic enzymes (digestion of protein) in the midgut. The higher pollen content of the rectum followed the same pattern as that in the midgut. The predominant two pollen species (Castanea sativa MILL (Sweet Chestnut) and Trifolium repens L. (White Dutch Clover)) were digested more efficiently by young bees than by foragers. The species of pollen found in bees from all age groups was constant and similar to the species of comb-stored pollen. The known age structure of the colonies permits an estimation of the amount of pollen in the gastrointestinal tract of all workers in a normal-sized colony. It was 80.7 and 107.1 grams in the two hives investigated. The pollen requirement for a year could be calculated from the average pollen content of a bee and the estimated bee-days per colony. It was 13.4 and 17.8 kg (29.5 and 39.2 lbs., respectively) in the two hives (Crailsheim et al. 1992).

Although pollen is the major dietary source of protein, lipids and vitamins for adult worker honey bees, relatively little is known about the mechanisms(s) employed by adult worker bees to release the protoplasmic nutrients from the pollen’s relatively indigestible cellulose wall (exine)

Drones (Apis mellifera carnica (POLLM)) consume pollen during their first days of life; after they start to fly, pollen consumption is negligible (Szolderits and Crailsheim 1993). Intestinal proteolytic activity is low at emergence; the maximum is reached between the 3rd and 4th days, and is extremely low in flying drones. Pollen digestion is low in older drones. Proteolytic activity occurs only in the midgut, which changes its weight and color during adult life. Activity is greatest in the most posterior part. Compared to worker bees, pollen consumption, proteolytic activity and pollen digestion are lower in all age groups of drones that consume significant amounts of pollen. This is true although the drones have about twice the body mass of worker bees.

Hrassnigg and Crailsheim (1998) found that midgut dry weight (tissue plus contents) of worker bees was a representative parameter for pollen consumption. Midguts of bees of successive ages were analyzed and correlated with various parameters. The relative proportions of sugar, protein and water were either constant or negatively correlated with midgut weight. Only the relative pollen weight (percent of midgut dry weight) increased. To investigate the influence of different levels of brood on pollen consumption of individual bees, midgut dry weights from two normally breeding control colonies and two brood-reduced experimental colonies were analyzed. In bees from control colonies the pollen consumption increased up to the nursing age (three to 10 days), remained on an elevated level in middle-aged bees (10-18 days) and decreased relatively sharply towards the foraging ages (> 21 days). When queens were caged in the experimental colonies, the following decline in brood cells affected the consumption of pollen differently. After six days of caging, with a reduction of open brood only, no effect was seen. After 15 days, and even more pronounced after 23 days when no brood was present, the pollen consumption in young and middle-aged (10, 14, 18 days) worker bees was significantly reduced, while it was clearly elevated in older bees, possibly to enhance life span. 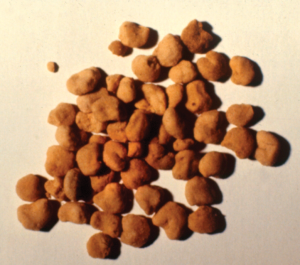 Although pollen is the major dietary source of protein, lipids and vitamins for adult worker honey bees, relatively little is known about the mechanism(s) employed by adult worker bees to release the protoplasmic nutrients from the pollen’s relatively indigestible cellulose wall (exine) (Klungness and Peng 1983). The outermost layer of the pollen wall is the pollenkitt, a semi-solid coating comprised primarily of neutral lipids, hydrocarbons, terpenoids and carotenoid pigments (Dobson 1988). Inside the pollenkitt is the exine, an often intricately-ridged matrix of the complex carbohydrate sporopollenin. The exine greatly resists decay and digestion, but is commonly perforated by one-to-several pores or slits (germination pores) that lead to the inner wall layer, known as the intine. The intine, composed primarily of cellulose and pectin, also resists decay and digestion, and forms the final barrier to the nutrient-rich cytoplasm. Thus, any animal consuming pollen contacts pollenkitt nutrients through external probing of pollen grains or ingestion of pollen grains, but must penetrate or dismantle two resistant pollen wall layers in order to access cytoplasmic nutrients (Roulston and Cane 2000).

Pollen pellets collected by forager bees show little sign of damage or predigestion, from the time of their collection from floral sources until their storage in the comb (Klungness and Peng 1983). Later, stored pollen (bee bread) is torn off in small pieces by the mandibles of the worker bee before being ingested. However, the gnawing and grinding action of the mandibles does not provide sufficient mechanical force to break the wall of the pollen grain (Whitcomb and Wilson 1929). After being ingested, pollen grains in the crop (honey stomach) are collected by the lips and hairs of the proventriculus where a bolus is formed before passage to the midgut (Bailey 1952; Barker and Lehner 1972). Once the bolus enters the midgut, it is ensheated by the peritrophic membrane and subsequently takes one to three hours to progress through the entire midgut (Bailey 1952; Barker and Lehner 1972; Dietz 1969). 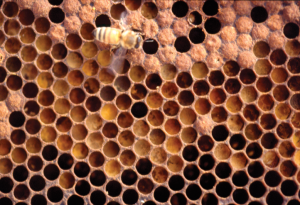 The digestion of dandelion (Taraxacum officinale) pollen by adult worker honey bees was initiated at the germination pores. Thirty minutes after feeding, pollen had reached the anterior midgut and the germination pores had become swollen. This permitted further removal of protoplasm during the next two hours of digestion as the pollen passed into the middle portion of the midgut. Three hours after feeding, pollen grains had reached the posterior midgut where some had ruptured to release both ‘naked’ protoplasm and masses of protoplasm but many remained intact or were only partially digested; undigested pollen grains passed unchanged to the rectum. The lipid-rich pollenkitt layer was removed from the exine during digestion. This study indicated that dandelion pollen was not utilized completely by honey bees (Peng et al. 1985).

Histochemical staining of embedded sections of the alimentary canal of honey bees indicated that carboxylated polysaccharides could be efficiently digested and absorbed, except when sequestered within unswollen and unbroken pollen grains that appeared to be impervious to enzymes of the gut.  Hemicelluloses and pectic acids of the pollen wall structure underwent partical digestion, but pollen wall cellulose and sporopollenin were not digested. A separation of pollen walls from colloidal semisolids of the pollenkitt and disgorged protoplasm was apparent. The layers of slurry created by this separation remained into the rectum, and consisted primarily of saturated organic compounds which do not stain with weakly basophilic or acidophilic dyes (Klungness and Peng 1984).

Proteolytic activity in the midgets of pupae and imagos (the adult stage) of worker honey bees was determined over a one-year period. The bees were of defined ages and the size of the hypopharyngeal glands was used as a parameter of their functional status. The activities of trypsin-like, chymotrypsin-like enzymes and the total caseinolytic activity were investigated; they did not depend on Ca2+ and showed optimal turnover at pH values above seven. Proteolytic activity is limited in pupae and newly emerged bees, then increases rapidly in the first hours of the imago stage. Proteolytic activity and the relation between trypsin- and chymotrypsin-like activity vary with age, season, and functional status.  Nurse bees show the greatest proteolytic activity. Age-dependent distributions of enzymatic activities in the endo- and ecto-peritrophic space indicate the peritrophic membrane establishes compartments for digestion within the midgut lumen (Moritz and Crailsheim 1987).

Honey bees satisfy their lipid requirement by consuming pollen.  The free fatty acid content of the midgut was used to quantify fat digestion. Midguts extracted from younger workers of known ages and from foragers were divided into three components: endoperitrophic region (peritrophic membrane with gut contents), extraperitrophic region and intestinal wall. Both the total amount of pollen and the amount of free fatty acids in the endoperitrophic region and in the intestinal wall depend on the bee’s age. The amounts increase within the first three days of a honey bee’s life, reach maxima around the age of eight days and then decrease continuously to the lowest values, measured in forager bees. Forced feeding with triacylglycerol results in significantly higher levels of free fatty acids, especially in the endoperitrophic region, in eight-day-old bees and foragers. This indicates that lipolytic activity depends on age and that the free fatty acid content in eight-day-old bees is primarily limited by the amount and availability of lipids ingested. The results show further that fat digestion depends on the functional status of honey bees, as is the case for pollen consumption, speed of transport of pollen bolus through the alimentary canal and protein digestion (Loidl and Crailsheim 2001).

Dietz, A. 1969. Initiation of pollen consumption and pollen movement through the alimentary canal of newly emerged honeybees. Ann. Entomol. Soc. Am. 62: 43-46. 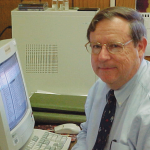