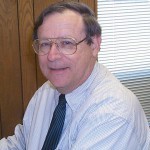 Honey bees take repeated orientation flights before becoming foragers at about three weeks of age (Winston 1987). Foragers must learn to navigate between the hive and floral locations that may be miles away. Young pre-foragers prepare for this task by performing orientation flights near the hive, during which they begin to learn navigational cues such as the appearance of the hive, the position of landmarks, and the movement of the sun (Lutz and Robinson 2013).  Bees with prior foraging experience will also perform re-orientation flights after the relocation of a colony (Winston 1987).

Capaldi et al. (2000) initiated their investigations of orientation flights by introducing one-day-old adult worker bees tagged with numbered disks into a colony of about 20,000 workers and a queen, and simply watching them as they exited and re-entered the hive. All flight activities of the tagged bees were recorded. They found that no bee became a forager (defined as a bee that returns to the hive with nectar or pollen) without taking at least one orientation flight and that almost all bees took multiple orientation flights before they began to forage. The number of orientation flights taken by bees before foraging was highly variable, ranging from one to 18 (mean 5.6 ± 0.29 flights). Equally variable was the age at which these flights began, ranging from three to 14 days (mean 6.2 ± 0.18 days). In this study the mean age at onset of pollen foraging was 14 ± 2 days. In a second study, they used harmonic radar to extend the range of their observations. Tagged one-day-old bees were introduced into a standard hive and all of their subsequent flights were visually observed and recorded. They were thus able to select bees of known age and flight history for radar tracking. Transponders were attached to bees as they departed from the hive and orientation flight tracks were recorded by the radar.  Each bee was tracked only once. They analyzed 29 complete (out and back) orientation flights taken by bees of different ages (3-27, median = six days), with differing degrees of experience (1-17 orientation flights). For comparison, they also tracked flights taken by experienced foragers of unknown age from the same hive. All flights were naturally occurring; that is, all tracked bees had moved spontaneously from inside the hive to the hive entrance before attachment of the transponder. Most bees fitted with transponders began their orientation flights with a brief period of hovering facing the colony entrance before departure, just as those without transponders did and has been previously reported. The duration of the orientation flights of bees with and without transponders was not significantly different (with transponders 331.6 ± 59.2 seconds; without transponders 340.1 ± 26.4 seconds). They therefore concluded that the attachment of transponders did not significantly alter flight behavior.  Significant positive correlations between flight number and speed relative to the ground (averaged over the journey), round trip journey distance, maximum range from the hive and the area covered by the convex polygon circumscribing each flight were found. There was no significant positive correlation between flight number and flight duration; as the bees gained experience they apparently travelled further by moving faster rather than by staying out longer.

Capaldi et al. (2000) findings suggest that bees take multiple orientation flights before becoming foragers in order to visit different and larger portions of the landscape around the hive. These flights provide them with repeated opportunities to view the hive and its surroundings from different positions, suggesting that bees learn the local landscape in a progressive fashion. Bees navigate using a combination of cues, including the position of the sun and the location of salient landscape features (Collett 1992; Dyer and Dickinson 1994), but it is not known how or whether information about these cues, obtained during sequential flights is integrated.

Scouting behavior is performed in two distinct contexts: scouting for new food sources or new nest sites. There are striking individual differences in scouting behavior- some bees act as scouts and others never do so. Food scouts, who make up five to 35% of a colony’s foraging force, search independently for new food sources and continue to do so even when plentiful sources have been found. Non-scouts do not search for novel food sources and instead rely on information from scouts (communicated via “dance language”) to guide their foraging. By constantly discovering new flower patches, food scouts help ensure a high influx of food to their colony, despite the ephemeral nature of each patch. Experienced foragers scout more than do novice foragers. The cost of finding a forage patch is greater for recruits than scouts, but the patches found by recruits are evidently superior to those found by scouts. The honey bees combined system of recruitment communication, scout-recruit division of labor, and selectivity in recruitment, apparently enhances a colony’s overall foraging efficiency by guiding a large majority of a colony’s foragers to good forage patches (Seeley 1983).

Nest scouts make up <5% of the population of a swarm, which is a fragment of a colony that has left its natal nest to start a new colony. Nest scouts search independently for potential nesting cavities and collectively choose the best one, whereas non-scout swarm members rely on information from scouts to guide them to their new home (Seeley 2010). Nest scouting is a crucial behavior; a colony’s survival depends on its nest scouts finding suitable protective living quarters. To determine the consistency of novelty seeking in individual bees across the two behavioral contexts, Liang et al. (2012) determined whether nest scouts are prone to also act as food scouts. They identified and marked nest scouts in both artificial and natural swarms. They then identified food scouts with the standard “hive moving” assay (Seeley 1983; Dreller 1998), after installing each swarm in a beehive and moving it at night (when bees don’t forage) to a new location outside the bees’ original home range. This assay identifies food scouts as the first bees to return to their hive in the morning; under these circumstances, each successful forager must have located a food source on her own.  There was a robust tendency of nest scouts to seek novel resources across different contexts, but it did not translate into every nest scout showing food-scouting behavior.  In nine trials involving eight different colonies over two years, nest scouts were on average 3.4 times more likely to become food scouts than were bees that did not search for nest sites during swarming.  These results demonstrate that some bees show consistent novelty seeking across diverse behavioral contexts.

Liang et al. (2012) also investigated the neurochemical basis of scouting behavior and they revealed some of the molecular underpinnings of this behavior relative to foragers that do not scout. Food scouts showed extensive differences in brain gene expression relative to other foragers, including differences related to catecholamine, glutamate, and g-aminobutyric acid signaling. Octopamine and glutamate treatments increased the likelihood of scouting, whereas dopamine antagonist treatment decreased it.

Viewing the nest-site scouting process at the group level, Seeley and Buhrman (1999) found: (1) the scout bees in a swarm find potential nest sites in all directions and at distances of up to several kilometers; (2) initially, the scouts advertise a dozen or more sites with their dances on the swarm, but eventually they advertise just one site; (3) within about an hour of the appearance of unanimity among the dancers, the swarm lifts off to fly to the chosen site; (4) there is a crescendo of dancing just before liftoff, and (5) the chosen site is not necessarily the one that is first advertised on the swarm.  Viewing the process at the individual level, they found: (1) the dances of individual scout bees tend to taper off and eventually cease, so that many dancers drop out each day; (2) some scout bees switch their allegiance from one site to another, and (3) the principal means of consensus building among the dancing bees is for bees that dance initially for a non-chosen site to cease their dancing altogether, not to switch their dancing to the chosen site.  They hypothesized that scout bees are programmed to gradually quit dancing and that this reduces the possibility of the decision-making process coming to a standstill with groups of unyielding dancers deadlocked over two or more sites.

When a scout returns to the swarm cluster after inspecting a high-quality cavity, she performs waggle dances which encode the distance and direction to the site.  Since a swarm has many scouts, many potential nest sites may be discovered, and dances for several sites may be performed simultaneously on the surface of the swarm cluster.  However, in time, the bees reach a consensus, and only dances for a single site are seen.  Shortly thereafter the cluster abruptly breaks and the bees fly to the chosen site (Camazine et al. 1999).

Nest-site choice by a honey bee swarm is an impressive example of group decision making. Seeley and Visscher (2003) considered the mystery of how the scout bees in a honey bee swarm know when they have completed their group decision making regarding the swarm’s new nest site. More specifically, they investigated how the scouts sense when it is appropriate for them to begin producing the worker piping signals that stimulate their swarm-mates to prepare for the flight to their new home. Two hypotheses were tested: “consensus sensing,” the scouts noting when all the bees performing waggle dances are advertising just one site; and “quorum sensing,” the scouts noting when one site is being visited by a sufficiently large number of scouts. Their test involved monitoring four swarms as they discovered, recruited to, and chose between two nest boxes and their scouts started producing piping signals. They found that a consensus among the dancers was neither necessary nor sufficient for the start of worker piping, which indicates that the consensus sensing hypothesis is false. They also found that a buildup of 10-15 or more bees at one of the nest boxes was consistently associated with the start of worker piping, which indicates that the quorum sensing hypothesis may be true.  In considering why the scout bees rely on reaching a quorum rather than a consensus as their cue of when to start preparing for liftoff, they suggest that quorum sensing may provide a better balance between accuracy and speed in decision making. In short, the bees appear to begin preparations for liftoff as soon as enough of the scout bees, but not all of them, have approved of one of the potential nest sites.

Honey bee scouting, where individual bees search the environment without prior information about the possible location of food sources or nest sites is notoriously difficult to study. The use of simulation models is one way to investigate the possible mechanisms behind the regulation of scouting at the group level as well as the ways in which the swarm searches its environment. Janson et al. (2007) used an individual based simulation model to study the scouting behavior of honey bee swarms. In their model they implemented a simple decision rule that regulated the number of scouts: individual bees’ first attempt to find a dance to follow but become scouts if they fail to do so. They showed that this rule neatly allows the swarm to adjust the number of scouts depending on the quality of the nest sites known to the swarm. They also explored different search strategies that allowed the swarm to select good-quality nest sites independent of their distance from the swarm.  Assuming that it is costly to move to a site that is far away, the best search strategy would be to give precedence to nearby sites while still allowing the discovery of better sites at distances farther away.