MUSHROOM BODIES IN THE BEE BRAIN

Mushroom bodies or corpora pedunculata are a pair of structures in the dorsal part of the brain (protocerebrum) of honey bees that act as multimodal sensory integration centers and are involved in learning and memory.

Farris et al. (1999) using 5-bromo-2-deoxyuridine incorporation and the Feulgen technique, showed that immediately before pupation, the brain of the developing honey bee contains approximately 2,000 neuroblasts (embryonic dividing cells that will develop into neurons) devoted to the production of the mushroom body intrinsic neurons (Kenyon cells). These neuroblasts are descended from four clusters of 45 or fewer neuroblasts each already present in the newly hatched larva.

Subpopulations of Kenyon cells, distinct in cytoarchitecture, position, and immunohistochemical traits, are born at different, but overlapping, periods during the development of the mushroom bodies, with the final complement of these neurons in place by the mid-pupal stage. Neurons are specialized cells that transmit nerve impulses; electrical and chemical signals. The mushroom bodies of the adult honey bee have a concentric arrangement of Kenyon cell types, with the outer layers born first and pushed to the periphery by later born neurons that remain nearer the center of proliferation. This was the first comprehensive study of larval and pupal development of the honey bee mushroom bodies.

A worker honey bee performs tasks within the hive for approximately the first three weeks of adult life. After this time, she becomes a forager, flying repeatedly to collect food outside of the hive for the remainder of her five-six week life. Studies have shown that foragers have an increased volume of neuropil (a dense network of interwoven nerve fibers and their branches and synapses) associated with the mushroom bodies. Farris et al. (2001) reported that growth of the mushroom body neuropil in adult bees occurs throughout adult life and continues after bees begin to forage. Studies using Golgi impregnation asked whether the growth of the collar region of the mushroom body neuropil was a result of growth of the dendritic processes of the mushroom body intrinsic neurons, the Kenyon cells.  Branching and length of dendrites in the collar region of the calyces were strongly correlated with worker age, but when age-matched bees were directly compared, those with foraging experience had longer, more branched dendrites than bees that had foraged less or not at all. The density of Kenyon cell dendritic spines remained constant regardless of age or behavioral state. Older and more experienced foragers therefore have a greater total number of dendritic spines in the mushroom body neuropil.

Their findings indicate that, under natural conditions, the cytoarchitectural complexity of neurons in the mushroom bodies of adult bees increases as a function of increasing age, but that foraging experience promotes additional dendritic branching and growth.

The behavioral maturation of adult worker honey bees is influenced by a rising titer of juvenile hormone (JH) and is temporally correlated with an increase in the volume of the neuropil of the mushroom bodies.  Fahrbach et al. (2003) explored the stability of this neuropil expansion and its possible dependence on JH.  They studied the volume of the mushroom bodies in adult bees deprived of JH by surgical removal of the source glands, the corpora allata. They also asked if the neuropil expansion detected in foragers persists when bees no longer engage in foraging, either because of the onset of Winter or because colony social structure was experimentally manipulated to cause some bees to revert from foraging to tending brood (nursing).  Results show that adult exposure to JH is not necessary for growth of the mushroom body neuropil, and that the volume of the mushroom body neuropil in adult bees is not reduced if foraging stops. These results are interpreted in the context of a qualitative model that assumes that mushroom body neuropil volume enlargement in the honey bee has both experience-independent and experience-dependent components.

The volume of the mushroom bodies of the brains of honey bee queens was estimated using the method of Cavalieri. Tissue samples were obtained from queens in five different behavioral and reproductive states: one-day-old virgin queens, 14-day-old virgin queens, 14-day-old instrumentally inseminated queens, nine- to 13-day old naturally mated queens, and five-month-old naturally mated queens. There were significant volume changes within the mushroom bodies during the first two weeks of adult life. The volume occupied by the somata of the intrinsic neuronal population (Kenyon cells) of the mushroom bodies decreased by approximately 30% and the volume of the neuropil of the mushroom bodies increased between 25 and 50%. These volume changes are strikingly similar to those previously reported to occur for worker honey bees switching from hive activities to foraging (Withers et al. 1993).  However, in this study they were found even in queens that had no flight experience. In addition, queens exhibiting these volume changes were found to have low blood levels of juvenile hormone while previous studies have shown that foraging worker honey bees have high hormone levels. These results suggest that some aspect of behavioral development common to both the queen and the worker castes is fundamental to protocerebral volume changes early in adulthood in honey bees. If juvenile hormone regulates this process, results from queens suggest that it may play an organizational role (Fahrbach et al. 1995). 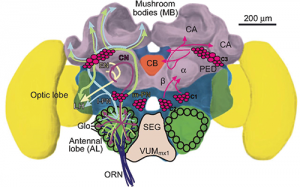 Fahrbach et al. (1997) found that drone honey bees, like the workers and queens, exhibit comparable morphological changes in the mushroom bodies of the brain during adult behavioral development. The volume of the mushroom bodies (MB) in the brains of drones was estimated from tissue sections using the Cavalieri method. Brains were obtained from six groups of drones that differed in age and flight experience. Circulating levels of juvenile hormone (JH) in these drones were determined by radioimmunoassay. There was an expansion of the neuropil of the mushroom bodies that was temporally associated with drone behavioral development, as in female queens and workers. The observed changes in drones were maintained in the presence of low levels of JH, also as in females.  These results suggest that expansion of the neuropil of the MB in honey bees is associated with learning the location of the nest, because this learning is the most prominent aspect of behavioral development common to all members (workers, drones, queen) of the honey bee colony.

Mushroom bodies (MB) are brain centers required for specific learning tasks. Cabirol et al. (2017) showed that environmental conditions experienced as young adults affect the maturation of mushroom bodies neuropil and performance in a mushroom body-dependent learning task.  Specifically, olfactory reversal learning was selectively impaired following early exposure to an impoverished environment lacking some of the sensory and social interactions present in the hive. In parallel, the overall number of synaptic boutons (an enlarged part of a nerve fiber or cell where it forms a synapse with another nerve) increased within the mushroom body olfactory neuropil, whose volume remained unaffected. This suggests that experience of the rich in-hive environment promotes mushroom body maturation and the development of MB-dependent learning capacities Brain structure and learning capacities both vary with experience, but the mechanistic link between them is unclear. Cabirol et al. (2018) investigated whether experience-dependent variability in learning performance can be explained  by neuroplasticity in foraging honey bees. The mushroom bodies are a brain center necessary for ambiguous olfactory learning tasks such as reversal learning. Using radio frequency identification technology, they assessed the effects of natural variation in foraging activity, and the age when first foraging, on both performance in reversal learning and on synaptic connectivity in the mushroom bodies. They found that reversal learning performance improved at foraging onset and could decline with greater foraging experience. If bees started foraging before normal age, as a result of a stress applied to the colony, the decline in learning performance with foraging experience was more severe.

Analyses of brain structure in the same bees showed that the total number of synaptic boutons at the mushroom bodies input decreased when bees started foraging, and then increased with greater foraging intensity. At foraging onset mushroom body structure is therefore optimized for bees to update learned information, but optimization of mushroom body connectivity deteriorates with foraging effort.

In adult workers, the volume of neuropil associated with the mushroom bodies is larger in experienced foragers compared with hive bees and less experienced foragers. In addition, the characteristic synaptic structures of the calycal neuropils, the microglomeruli (synaptic complexes), are larger but present at lower density in 35-day-old foragers relative to one-day-old workers. Age- and experience-based changes in plasticity of the mushroom bodies are assumed to support performance of challenging task, but the behavioral consequences of brain plasticity in insects are rarely examined. In this study, foragers were recruited from a field hive to a patch comprising two colors of otherwise identical artificial flowers. Flowers of one color contained a sucrose reward mimicking nectar, flowers of the second were empty. Task difficulty was adjusted by changing flower colors according to the principle of honey bee color vision space.  Microglomerular volume and density in the lip (olfactory inputs) and collar (visual inputs) compartments of the MB calyces were analyzed using anti-synapsin I immunolabeling and laser scanning confocal microscopy.  Foragers displayed significant variation in microglomerular volume and density, but no correlation was found between these synaptic attributes and foraging performance (Van Nest et al. 2017).

Kiya et al. (2007) established a method to visualize neural activity in the honey bee brain, using a newly discovered immediate early gene which they termed kakusei.  Kakusei-expression was induced transiently in the brains of workers with a peak at 30-60 minutes after seizure induced by awakening the workers from anesthesia, and was useful to detect neural activity in the worker brains. In addition, kakusie-transcript contained no significant open reading frame that encodes a protein, and was located in the nuclei of the worker brains, suggesting that kakusei-transcript functions as a non-coding nuclear RNA. In the forager brains, kakusei was preferentially expressed in a mushroom body neuron subtype, the small-type Kenyon cells (sKCs).  In contrast, the sKC-preferential expression pattern of kakusei was not observed in the other behavioral groups, including the nurse bees, lightexposed bees (workers that had been exposed to white light after dark adaptation, and bees that underwent the re-orienting flights after the hive was moved. These results strongly suggested that the sKC-preferential neural activity is related specifically to the behavioral components of foraging, rather than to common behavioral traits among foraging and other behaviors, such as the flying experience and/or memorizing landmarks.

Kiya and Kubo (2011) set out to elucidate the sensory basis that underlies the mushroom body neuron activity in the forager brain, by investigating the relationship between kakusei expression and the types of foraging behavior.  Through analyses of the round and waggle dancers, they observed a higher number of mushroom body neurons are active in the round dancers than in the waggle dancers. In addition, through the analysis of foragers that flew through the narrow tunnels with vertical or axial stripes, they observed that the amount of kakusei transcript correlated with the foraging frequency, while the kakusei signal density is different between the tunnel patterns. Their results suggest that the foraging frequency and visual experience during the foraging flight are associated with the different mushroom body neural activities in the forager brains.