The regulation of age-based division of labor among workers demands a high level of colony integration.

Honey bee workers perform different tasks as they age and this phenomenon is referred to as temporal polyethism or division of labor (Robinson 1992). After emergence as adults, usually the worker bees first clean cells, and as they age they feed the larvae and queen, process and store food, secrete wax and construct comb, and guard the entrance. The most prominent behavioral change is observed when the bees are about three weeks old, the age when they start foraging (Seeley and Kolmes 1991). Plasticity is an important attribute of division of labor and colonies respond to changes in the internal and external environment by adjusting the ratios of individual workers engaged in the various tasks. This is accomplished in large part via the behavioral flexibility of the individual workers themselves (Robinson 1992).

The regulation of age-based division of labor among workers demands a high level of colony integration. Honey bees generally work in the nest for the first three weeks of adult life and then spend their final one to three weeks foraging, but they can accelerate, retard, or reverse their behavioral development in response to changes in colony or environmental conditions, or both (Robinson 1992). It is important for colony survival and reproduction that bees respond accurately to the need for a particular worker activity because the shift from nest duties to foraging requires complex physiological changes (Winston 1987). Huang and Robinson (1992) studied how workers obtain information that influences one form of plasticity in behavioral development: precocious development, in which bees begin foraging as much as two weeks earlier than average (Winston 1987). 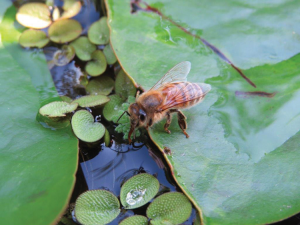 The age at which worker honey bees begin foraging varies under different colony conditions. Several studies have shown that juvenile hormone (JH) mediates this behavioral plasticity, and that worker-worker interactions influence both JH titers and age at first foraging. These results also indicated that the age at first foraging is delayed in the presence of foragers, suggesting that colony age demography directly influences temporal division of labor.  Huang and Robinson (1996) tested this hypothesis by determining whether behavioral or physiological development can be accelerated, delayed, or reversed by altering colony age structure. In three out of three trials, earlier onset of foraging was induced in colonies depleted of foragers compared to colonies depleted of an equal number of bees across all age classes. In two out of three trials, delayed onset of foraging was induced in colonies in which foragers were confined compared to colonies with free-flying foragers.  Finally, in three out of three trials, both endocrine and exocrine changes associated with reversion from foraging to brood care were induced in colonies composed of all old bees and devoid of brood; JH titers decreased and hypopharyngeal glands regenerated. These results demonstrate that plasticity in age-related division of labor in honey bee colonies is at least partially controlled by social factors.

Siegel et al. (2013) investigated the timing and pattern of preforaging behavior in distinct strains of bees to (1) determine if a general pattern of temporal division of labor exists in honey bees, (2) to demonstrate a direct genetic impact on temporal pacing, and (3) to further elucidate the mechanisms controlling foraging initiation. Honey bees selected for differences in stored pollen demonstrate consistent differences in foraging initiation age. Those selected for increased pollen storage (high pollen hoarding strain, HSBs) initiate foraging earlier in life than those selected for decreased pollen storage (low pollen hoarding strain, LSBs).  They found that HSBs both initiate and terminate individual pre-foraging tasks earlier than LSBs when housed in a common hive environment. Unselected commercial bees (wild type) generally demonstrated intermediate behavioral timing.  There were few differences between genotypes for the proportion of pre-foraging effort dedicated to individual tasks, though pre-foraging effort differences differed dramatically. This demonstrates that behavioral pacing can be accelerated or slowed, but the pattern of behavior is not fundamentally altered, suggesting a general pattern of temporal behavior in honey bees. This also demonstrates direct genetic control of temporal pacing. Finally, their results suggest that earlier HSB protein (pollen) consumption termination compared to LSBs may contribute to an earlier decline in hemolymph vitellogenin protein titers, which would explain their earlier onset of foraging.

Toth and Robinson (2005) investigated whether there is an association between nutritional state (as indicated by stored abdominal lipid amounts) and division of labor. They found that foragers (typically older bees) had lower lipid amounts than did nurses (typically young bees).  Results from experimental colonies that contained nurses and foragers of the same age showed that the lipid decline in foragers was not attributable to age. Analysis of bees with different amounts of foraging experience revealed little effect of the act of foraging on lipid stores.  Lipid levels were low even on the first day of foraging, suggesting that the decline in stored lipids precedes the onset of foraging.  They also found that bees that revert from foraging to nursing did not regain their lipid stores, indicating that high lipid stores are not required to sustain brood care behavior. This demonstration of a robust association between reduced lipid stores and the transition to foraging suggests that worker nutritional state may be involved in the regulation of division of labor in colonies. 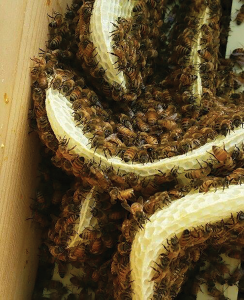 Hormone analysis and exocrine gland measurements were made to probe for physiological correlates of division of labor among similarly aged adult worker bees. Middle-age bees (ca. two weeks old) performing different tasks showed significant differences in both juvenile hormone (JH) biosynthesis rates and hemolymph titers; guards and undertakers had high JH, and wax producers and food storers, low JH.  Guard and undertakers had similar hormone levels to foragers, even though they were 10 days younger than foragers. No differences in JH were detected among young bees (one-week-old queen attendants and nurses) or older bees (three to four week-old pollen foragers, non-pollen foragers, and soldiers).  Hypopharyngeal gland size was inversely correlated with worker age and rate of JH biosynthesis, but soldiers had significantly larger hypopharyngeal glands than did foragers, despite their similar age and JH level. Results from soldiers indicate that exocrine gland development is not always linked with age-related behavior and endocrine development; they also support the recent claim that soldiers constitute a group of older bees that are distinct from foragers. Hormonal analyses indicate that the current model of JH’s role in honey bee division of labor needs to be expanded because high levels of JH are associated with several other tasks besides foraging. JH may be involved in the regulation of division of labor among similarly aged workers in addition to its role in age-related division of labor (Huang et al. 1994).

Division of labor has been classically viewed as a sequence of age-related changes in task performance. Some have questioned whether there is any age-related within-nest specializations associated with house bees. Johnson (2008) investigated whether nurses (typically aged four to 12 days) and middle- aged bees (aged 12-20 days) have distinct task repertoires. A large number of workers in both age groups working within the same nests at the same time were observed. The results support their being two castes of within-nest bees. Young bees specialized on brood care tasks, while middle-aged bees specialized on nectar processing and nest maintenance. Middle-aged bees were observed caring for brood in less than 1% of the observations. Moreover, both castes exhibited movement patterns that correspond to the traditional view that nurses stay within the broodnest, while middle-aged bees move around a great deal in search of work throughout the nest. 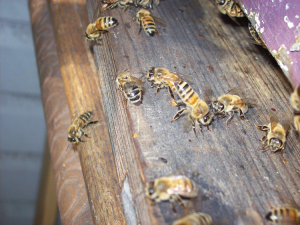 Some worker honey bees respond to major disturbances of the colony by flying around the assailant and possibly stinging; they are a subset of the bees involved in colony defense. These defenders have an open-ended age distribution similar to that of foragers, but defensive behavior is initiated at a younger age than foraging is. Behavioral and genetic evidence shows that defenders and foragers are distinct groups of older workers. Behaviorally, defenders have less worn wings than foragers, suggesting less flight activity. Genetically, defenders differ in allozyme frequencies, demonstrating different subfamily compositions from foragers in the same colony. They also differ in allozyme frequencies from guards in the same colony providing further evidence for division of labor associated with colony defense (Breed et al. 1990).