Sometimes, however, a colony must collect pure water.

A colony of honey bees needs water for several functions: to maintain body fluid homeostasis in the adult bees, to produce glandular secretions and dilute honey for feeding the brood, to cool the nest on hot days, and (in dry climates) to humidify the nest to prevent desiccation of the brood (Park 1949; Nicolson 2009; Human et al. 2006). Nectar is mostly water (35-85%), so a colony’s water needs are often met by its collection of nectar (Seeley 1995). Sometimes, however, a colony must collect pure water. These are times when the colony’s nectar collection is meager, because of cold weather or a dearth of nectar-bearing flowers, or its water consumption is high, because of a high demand for brood food or a strong need to perform evaporative cooling. In either situation, the workers that are a colony’s water collection specialists spring into action (Park 1949; Lindauer 1955; Robinson et al. 1984). It is likely that whenever a colony has a high water consumption it must quickly boost its water collection. This is because colonies do not maintain large water stores in their nests. 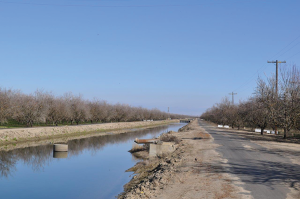 The second need for water is for consumption by nurse bees when they feed the brood, which is an aspect of water use by honey bees that tends to be underestimated (Johansson and Johansson 1978). Nurse bees feed young larvae a proteinaceous secretion from their hypopharyngeal/mandibular glands; for worker larvae after the third day this jelly is supplemented with honey and pollen (Crailsheim 1998). The water content of royal jelly is high (approximately 67%), so nurse bees have a great need for water when brood rearing is intensive; this water cannot always be obtained from nectar (Nicolson 2009).

A honey bee colony can achieve water homeostasis without maintaining a large water reserve because water, unlike nectar and pollen, is generally available (Seeley 1995). However, the reliance on external water sources requires rapid activation and deactivation of water collectors, as conditions change. Little is known about what activates a colony’s water collectors. Perhaps water collectors become active when they are intensely begged for fluid but they have none to share because their crops (honey stomachs) are empty.  Another possibility is that water collectors are activated by sensations of thirst after they have emptied their crops in response to their nestmates’ request for fluid.   The first bees to start water collection may be stimulated by the collective increase in honey stomach sugar concentration of all bees in the nest, due to trophallaxis (Lindauer 1955; Seeley 1995) or possibly by the collective increase in hemolymph osmolality (Nicolson 2009). Colonies collect water for two reasons, related to different types of weather: for cooling of the brood area by evaporation on hot days, and for feeding the larval brood when foraging is limited on cool days (Lindauer 1955; Seeley 1995).  What is clear is that high broodnest temperatures by themselves do not activate water collectors because these bees are often stimulated to fetch water even without heat stress. The marked delay between the increase of hive temperature and the initiation of water collection (Kühnholz and Seeley 1997; Ostwald et al. 2016), implies that water collectors are not responding directly to the increase in nest temperature when they become active. This is not surprising, as the water collectors normally stay near the hive entrance, away from the broodnest where the temperatures are higher.

More is known about what deactivates water collectors. When a water collector returns to her hive with a load of water, she offers her load to middle-aged bees that have positioned themselves near the nest entrance in order to unload bees returning with water.  If the colony’s need for water is high, then a water collector quickly (within 30 seconds) finds a bee to unload her. But if her colony’s need for water is low, then she has difficulty finding a bee willing to accept her load. When it takes a water collector more than five minutes to find a nestmate willing to take her load of water, during which time the collector experiences dozens of unloading rejections, she stops her work and rests inside the hive (Kühnholz and Seeley 1997).

Lindauer (1955) showed how bees regulate the hive temperature in hot conditions. Water is collected by water foragers, then distributed around the hive and in cells containing eggs and larvae; fanning accelerates its evaporation, as does regurgitation and evaporation on the tongue. To protect the broodnest from overheating when the weather suddenly turns hot, a colony must be able to begin evaporative cooling even before water collection begins; hence it must provision itself with water in some capacity beyond its immediate need. Ostwald et al. (2016) found evidence that a colony does indeed maintain a store of water for evaporative cooling: the level of colony thirst and the rate of water collection increased only gradually in the study colonies after the onset of broodnest hyperthermia. This reserve of cooling fluids must be small since the study colonies started to lose control of the broodnest temperature as soon as they lost access to an external supply of water. Where does a colony maintain a store of water for evaporative cooling? One possibility is that a colony’s store of unripened nectar can function as a buffer against overheating (Lindauer 1955). A second possibility is that there exist ‘reservoir’ bees, that is, bees with water-filled crops. Still a third possibility is that bees deposit and store water in some of the cells of the combs.

Analysis of crop contents of worker bees over a range of conditions suggests that water-filled bees are most prevalent after a period of heat stress combined with water deprivation. Water collectors generally had more dilute crop contents than hive bees sampled at the same time. In the trials in which they heated the broodnest and provided water ad libitum, the water collectors were more likely to contain dilute crop contents than the hive bees. It makes sense that a water collector that may not have found a bee willing to unload her once the colony’s thirst had declined would retain a full load of water into the evening, available for unloading as needed (Ostwald et al. 2016).

Water is collected by individual foragers, who at least sometimes specialize in this task for long periods of time (Robinson et al. 1984). A bee flies from the hive with some sugar provisions in her crop, consisting of diluted honey or nectar. When she arrives at the water source she fills her crop with water. Her closed proventricular valve stops the water from passing further in her gut. She flies back to the nest and regurgitates the water in her crop to other bees and may perform recruitment dances to inform other bees of the location of the water source (von Frisch 1967).  The water collection flights of bees are of special physiological interest because during the return flight a honey bee’s crop is filled with water instead of with sugar solution, as is otherwise nearly always the case. Thus a water collecting bee returning to the hive is like a car running with a fuel tank full of water instead of gasoline.

Water foraging bees in a desert collect water up to two km (1.24 miles) from their colony, and have consistent crop filling and flight times. They leave their colony and arrive at the water source with less than or equal to one mg sugar in their crops, which they dilute at the water source by collecting about 40 µl of water. In 500 meter (.31 miles) flights back to the colony, radioisotope studies show they pass almost no crop contents to their midgut. If prevented from entering the colony for 15-36 minutes, they do pass about half of their crop contents to their midgut, probably when hemolymph sugar levels become very low. This water is rapidly absorbed from the midgut to hemolymph, and then is apparently rapidly excreted to the rectum via the Malpighian tubules and defecated. In this process the bee absorbs and excretes a volume of water at least as great as her entire hemolymph volume in a relatively short time (<20 min). The return flights of water collecting bees are normally fueled from sugar reserves in the bee’s bodies, and these reserves limit water collection to within a few kilometers of the colony. This limitation probably affects dispersal and density of honey bees in arid areas (Visscher et al. 1996).

The regulation of humidity in honey bee colonies has only been studied on a limited basis (Doull 1976; Human et al. 2006; Ellis et al. 2010). There is a controversy whether relative humidity in the colony is actively regulated: some think that humidity inside colonies varies passively (Simpson 1961; Lindauer 1955), while Ellis et al. (2008) concluded that humidity in colonies is actively controlled by workers. Human et al. (2006) indicated workers can only control humidity in the colony within sub-optimal limits. Brood comb has been shown to be able to function as a humidity buffer in nests (Ellis et al. 2010). In spite of the supposedly important role of humidity in brood development (Park 1949; Lindauer 1955), little is known how this parameter is regulated by honey bees, if at all (Ribbands 1953; Simpson 1961).

Colonies collect water for two reasons, related to different types of weather: for cooling of the brood area by evaporation on hot days, and for feeding the larval brood when foraging is limited on cool days.

Antennal hygroreceptors (respond to relative humidity) of the honey bee have been investigated electrophysiologically and the sensillum containing these receptors with scanning electron microscopy. Moist and dry hygroreceptors have been identified along with a thermal receptor in a specialized coeloconic sensillum.  This sensillum comprises a cuticular, shallow depression (diameter; four µ) having a central opening (1.4-1.5 µm) and a mushroom-shaped protrusion (1.4-1.5 µm) from the opening. The head of the protrusion is irregular in shape and is not perforated.

This sensensillum has been thus far referred to as a “sensillum campaniformium” (Dietz and Humphreys 1971), henceforth, it is referred to as a coelocapitular sensillum. Both moist and dry hygroreceptors are antagonistic with respect to their responses to humidity; one responds with an increase in impulse frequency to rising humidity, the other to falling humidity (Yokohari et al. 1982).

To advance the understanding of water economy in honey bee nests, Ellis et al. (2008) investigated whether workers exhibit a hygropreference when exposed to a gradient of 24-90% relative humidity and whether the expression of this preference and their behavior is affected by the presence of brood. Their results showed that young workers in the absence of brood exhibited a weak hygropreference for approximately 75% relative humidity (R.H.).  When brood is present the expression of this preference is further weakened suggesting that workers tend to the brood by distributing evenly in the gradient.  In addition, fanning behavior is shown to be triggered by an increase in humidity above the preferred level but not by a decrease. Their results suggest that humidity in colonies is actively controlled by workers.

Analysis of crop contents of worker bees over a range of conditions suggests that water-filled bees are most prevalent after a period of heat stress combined with water deprivation.

Humidity is an important microclimatic variable for honey bees since their eggs require a relative humidity of above 55% to hatch successfully, with the highest survival between 90 and 95% relative humidity (Doull 1976).  There was a significant decline in the number of normal larvae that emerged when eggs were incubated at 100% and 80% relative humidity. At 50% R.H. many eggs shriveled and of the remainder, only 2.9% produced normal larvae.  No eggs hatched at humidity’s below 50%. Abnormal hatching was found to be due to failure of the hatching fluid to dissolve that part of the chorion (egg shell) covering the heads of the larvae.