Royal jelly is a part of the diet of honey bee larvae and it plays a major role in caste differentiation.

The development of a honey bee larva depends on a complex proteinaceous secretion of the cephalic (relating to the head) glandular system of nurse bees, the so-called larval jelly or bee milk. The quantity and composition of larval jelly which is provided to individual larvae by the nurse bees differs according to sex, caste and age of the larvae (Haydak 1970; Asencot and Lensky 1988; Brouwers et al. 1987). The larval jellies- royal (RJ), worker (WJ) and drone jellies (DJ) – differ in the ratio of fructose to glucose and in the content of the vitamins and proteins (Brouwers et al. 1987; Brouwers 1982, 1984; Thrasyvoulou 1983). 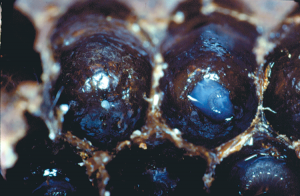 Royal jelly is a part of the diet of honey bee larvae and it plays a major role in caste differentiation.  Royal jelly is derived from secretions of both the hypopharyngeal and mandibular glands of nurse bees (Knecht and Kaatz 1990; Lensky and Rakover 1983). Newly emerged bees have undeveloped hypopharyngeal and mandibular glands.  Hypopharyngeal glands are paired glands inside worker’s heads, consisting of a long central duct with many acini attached. The glands will only develop after consuming large quantities of pollen for the first seven to 10 days. The hypopharyngeal glands first secrete the protein rich component of royal jelly in young bees, but then secrete invertase, which is used to convert sucrose to simple sugars (fructose and glucose), in foragers. Mandibular glands are simple, sac-like structures attached to the base of each mandible. The glands secrete lipid-rich components of the royal jelly in young bees, but produce an alarm pheromone (2-heptanone) in foragers (Huang 2010). 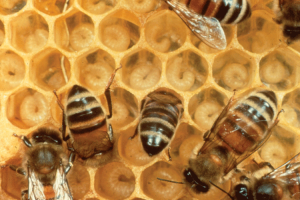 The behavior of nurse bees provisioning brood cells was studied by using video equipment to make long-term recordings of individual queen and worker larvae from hatching until the brood cell was sealed. The contents of water, sugars, proteins, lipids and free amino acids were determined for larval food collected from brood cells containing drone, worker or queen larvae. The feeding pattern of queen larvae hardly altered during their development; most feedings occurred during relatively short (<50 seconds) visits of nurse bees and the composition of the royal jelly remained nearly constant. In worker larvae short feedings were regularly observed during the first 48 hours of development but in the subsequent period of 36 hours almost all feedings were of long (>50 seconds) duration. In this period a marked decline was observed in the glucose/fructose ratio for worker jelly. After 84 hours of larval age, feedings of long duration were interspersed with feedings of short duration. At this stage the total sugar content of worker jelly increased and the contents of proteins and lipids decreased simultaneously (Brouwers et al. 1987).

Hypopharyngeal glands isolated from bees feeding younger worker larvae (making long visits) displayed high rates of in vitro protein synthesis. Most glands from bees feeding queen larvae (brief visits) demonstrated reduced synthetic activity. It was suggested that the duration of the larval feedings is related to the origin and consequently to the composition of the food secreted by the nurse bees (Brouwers et al. 1987).

The contents of glucose, fructose and sucrose were determined in the natural diets of male and female honey bee larvae reared under various conditions (Brouwers 1984). Glucose was predominant during the early larval stages of workers and drones, but fructose became the main sugar component in the food of older larvae. In the diet of queen larvae, glucose remained the main sugar component throughout the larval period. The abundance of food supplied to worker larvae after a broodless period was characterized by extremely low glucose content. 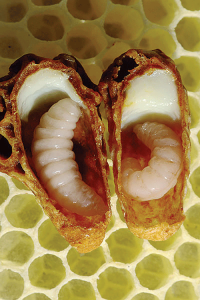 Queen larvae have more than enough food all of the time.

Newly emerged larvae were reared in the laboratory on 32P-labeled royal jelly. The resulting adults were classified as workers, intermediates, or queens, depending on their morphological caste characters. Larvae destined to become queens ate 13% more food than worker larvae during the first three days of larval life. This difference increased to about 40% after six days of larval life. The mean rate of ingestion was 8% less in intermediates as compared to queen larvae during the first three days after hatching, and 16% less after six days of larval life. Queen larvae consumed an average of 5% more royal jelly than intermediates, and 19% more than workers (Dietz and Lambremont 1970).

Thrasyvoulou (1983) studied the changing patterns of honey bee larval food proteins during larval life with polyacrylamide disc electrophoresis. When sodium dodecyl sulfate detergent was used the number of protein bands increased from 10 to 15 in worker jelly, from eight to 10 in royal jelly and from 11 to 13 in drone jelly.  Patterns of older worker and drone larval diet were more complex than those of queen larval diet.  Comparing the results with a previous analysis, slight differences in protein patterns between two races of bees (Apis mellifera cercropia and Apis mellifera liquistica) were found.

Norms were established for respiration, growth, and tissue composition of 0- to 72-hour-old female honey bee larvae reared in the laboratory on natural royal jelly and worker jelly diets. The worker jelly diet was then altered experimentally in the direction of royal jelly through additions of sugar and certain water-soluble acids of unknown structure extracted from royal jelly, but present in the natural diets of larvae of both female castes. In general, developmental norms were shifted in the direction of the norms of larvae fed royal jelly, but the changes were not fully coordinated. The added acids were strongly growth inhibitory. A high inverse association between the total water-soluble acid content of the diet and larval weight suggested that the acids may represent a nutritional growth-regulating mechanism. The evidence indicates that nutrient balance is significant in the early development of the dichotomy between female castes, and that no single constituent determines the ultimate development of either caste (Dixon and Shuel 1963). 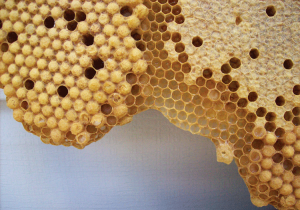 Drone brood have a different diet.

As larvae, drones have different protein and sugar requirements than workers, and in each life stage drones and workers differ in body composition (percentages of glycogen, lipids and proteins (Hrassnigg and Crailsheim 2005). The investment of nurses to raise an individual drone larva far exceeds that for a worker larva (Haydak 1970). This is reflected in the increased tending of drone larvae (Calderone and Kuenen 2003), and it obviously can be deduced from the weight gain of larvae during the larval period.  Worker larvae reach a maximum fresh weight, measured at the time of cell sealing, of 144-162 mg, and drone larvae reach 262-419 mg.  Thus, drone larvae attain 1.8-2.6 times the weight of worker larvae (Hrassnigg and Crailsheim 2005).

The composition of royal jelly varies with seasonal and regional conditions. Variations in royal jelly composition can result from: the nutritional condition and age of the contributing nurse bees; the age of the queen larvae which influences the amount of sugar; and trace minerals resulting from the distinct compositions of pollens among plant species (McNeil and Schmidt 2015).

The average moisture content of royal jelly is 60-70%, crude protein 12-15%, total sugar 10-16%, lipids 3-6%, vitamins, salts and free amino acids. The crude protein of royal jelly consists of water-soluble and water-insoluble proteins. The water-soluble proteins make up 46-89% of the total proteins (Smitzová et al. 1998). Major proteins of royal jelly are members of the (MRJP=major royal jelly protein) family. Total protein is comprised of 52 different proteins. The majority of the identified proteins (47 out of 52) are members of the major royal jelly protein family (MRJPs), named as MRJP1 through 6, each of which has many variations (Huang 2010). Proteins MRJP3 and MRJP5 are polymorphic (Albert et al. 1999; Huang 2010). MRJPs account for 82 to 90% of total larval jelly protein and they contain a relatively high amount of essential amino acids. Schmitzová et al. (1998) found that royal jelly and worker jelly contain identical major proteins.

The consumption of royal jelly determines the differences between castes and behavioral development in the honey bee due to several epigenetic RNA occurances on future queen larvae. However, it is not known whether the proteins of royal jelly are related to these differences, or which proteins are responsible for the changes. To understand the functions of royal jelly proteins that are present in other tissues of the bee, in addition to the hypopharyngeal gland, Peixoto et al. (2009), used a polyclonal antibody anti-MRJP1 to investigate the presence of this protein in the honey bee nervous system. This study showed the presence of three polypeptides (p57, p70 and p128) in specific tissues of the bee brain.  Mushroom body, optic lobe and antennal lobe neuropils all contained proteins recognized by anti-MRJP1. Proteomic analysis showed that the three polypeptides are correlated with proteins of the MRJP family. P57 is correlated with MRJP1, p70 with MRJP3, while p128 may be an oligomeric form or a new polypeptide.  Immunostaining of the brain and hypopharyngeal gland revealed differential expression of MRJPs in various brain regions and in different honey bee castes and subcastes. The identification and localization of these MRJPs contribute to the elucidation of the biological roles of this protein family.

In addition to protein, royal jelly also contains many trace minerals, some enzymes, antibacterial and antibiotic components, and trace amounts of vitamin C. The fat-soluble vitamins, A, D, E, and K are absent from royal jelly. Three enzymes were also detected in the royal jelly: glucose oxidase, peroxiredoxin and glutathione s-transferase (Huang 2010).

Brouwers, E.V.M., R. Ebert and J. Beetsma 1987. Behavioural and physiological aspects of nurse bees in relation to the composition of larval food during caste differentiation in the honeybee. J. Apic. Res.  26: 11-23.

Dixon, S.E. and R.W. Shuel  1963.  Studies in the mode of action of royal jelly in honeybee development: III. The effect of experimental variation in diet on growth and metabolism of honeybee larvae. Can. J. Zool.  41: 733-739.