Trophallactic interactions can frequently be seen non-randomly between all members of the colony. 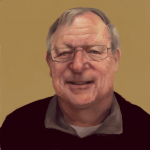 Trophallaxis, the transfer of food by mouth from one individual to another, occurs among adults of honey bee colonies (Crailsheim 1998). The drones and the queen consume but do not donate, while the workers are recipients and donors. They share the content of their honey stomachs and sometimes the products of their head glands. Such trophallactic interactions can frequently be seen non-randomly between all members of the colony. Their occurrence and success depend on factors such as sex and age of the consumers and donors, food availability and quality, time of day, weather and season. 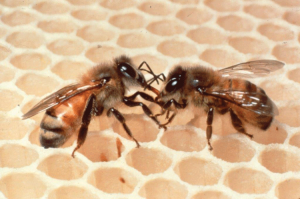 For the youngest workers, old workers, drones and the queen this flow – especially the flow of protein has definite nutritional importance since these bees need protein but have only a limited capacity to digest pollen and consume none or only small amounts of it. The system of trophallactic food flow and the existence of a specialized group, the nurses, who are responsible for consuming pollen and processing it into easily digestible jelly enables the colony to have many members with a reduced digesting capacity. Bees that store food specialize in transporting harvested nectar within the hive, receiving it from foragers near the entrance and depositing it in other parts of the hive where it is processed into honey. This saves time and helps the foragers to harvest available food sources more efficiently. In addition to its nutritional value and the importance of transfer to specialists, receiving and donating food in the trophallactic flow of food provides information to colony members about the quality and quantity of food existing in the hive and therefore can be compared in its importance with the dance language and communication by pheromones (Crailsheim 1998).

Trophallactic behavior is normally initiated by a bee asking for food, by protruding her tongue toward the mandibles of another bee, termed the donor if the contact leads to a transfer. The antennae of the recipient are directed towards the donor. The donor’s antennae are kept more or less downward and close to the head. The antennae of both individuals touch each other frequently. This antennal contact is important; if it is hindered by partial or total amputation, the success of transfer is reduced. A donor may offer food with or without being asked. A food droplet, the size of which may vary, is kept between the mandibles and the prementum, and is sucked  up by the recipient’s tongue. A transfer to a worker might last from a few seconds up to a few minutes (Crailsheim 1998).

During periods when the colony needs a lot of water, foragers may switch from collecting pollen or nectar to water collection.  This water is transferred to other bees in the colony by trophallactic contacts and is deposited into cells (Park 1923). It is used for several purposes, such as: to dilute honey in spring when brood rearing increases, to thermoregulate the colony during hot weather and as a reserve if the metabolic water produced by a bee does not fully cover its needs (Louw and Hadley 1985).

Trophallactic behavior may also be involved in the distribution of pheromones within the colony. Queen honey bees produce pheromones that mediate and integrate the worker’s activities (Velthuis 1972; Slessor et al. 1988, 1990; Kaminski et al. 1990; Keller and Nonacs 1993; Engels et al. 1997). These pheromones are not only evaporated and transferred by antennal contacts (Seeley 1979; Ferguson and Free 1980; Naumann et al. 1991), but also distributed upon their body surface. From there they are licked by bees surrounding the queen, the royal court (Allen 1955). As individuals of the colony participate in the trophallactic flow, pheromones are distributed to all hive members in this way (Butler 1954), although the transfer by antennal contact seems to be the most effective and fastest manner.

Trophallactic behavior may also be involved in the distribution of pheromones within the colony.

Forager bees returning to the hive after visiting a nectar source unload the collected liquid food to recipient hivemates, through mouth-to-mouth food exchange contacts (trophallaxis). Wainselboim and Farina (2000) analyzed whether the main characteristics that define nectar in energetic terms, that is, rate of production (flow of solution), sucrose concentration and rate of sucrose production (sucrose flow) influence trophallactic behavior. Individual bees trained to feed at a regulated-flow feeder offering sucrose solution were captured once the foraging visit was complete and placed in an acrylic arena with a recipient bee that had not been fed. The rate at which liquid was transferred during the subsequent trophallactic contact (transfer rate) was analyzed as a function of the different solution flows and sucrose concentrations offered at the feeder.

A relationship was found between transfer rate during trophallaxis and the flow of solution previously presented at the feeder. This relationship was independent of sucrose concentration when above a certain threshold value (ca. 22% weight on weight). They also analyzed whether the rate of sucrose deliverance of the food source (sucrose flow) influenced the rate at which the solution was transferred.  No clear relationship was found between the rate of sucrose deliverance during trophallactic events (sucrose transfer rate) and the sucrose flow presented at the feeder.

Upon arriving at the hive from a successful foraging trip, the speed at which the liquid is transferred (unloading rate) from donor to recipient is related to the profitability offered by the recently visited food source. However, because a forager’s evaluation of the profitability of a food source, as measured by dancing behavior, is influenced by previous foraging experience, Wainselboim and Farina (2003) investigated whether trophallaxis might also be influenced by previous foraging experience. They measured unloading rate for a given profitability condition at the food source (in terms of solution flow rate) in three groups of foragers that differed in their previous experience at the source. One group experienced the same flow rate of solution in five successive visits (control group), another group experienced a lower flow rate in the first four visits and the third group experienced a higher flow rate in the first four visits. Their results showed that bees trained to a lower flow rate increased their unloading rate compared with the control group, indicating an influence of past foraging experience on their evaluation of food source profitability. This influence was not observed in the group trained to a higher flow rate, which responded similarly to the control group. Additional experiments indicated that foragers appear to evaluate the profitability of the source by integrating an overall flow rate throughout the entire visit, instead of measuring only the current flow rate delivered by the feeder.

Upon arriving at the hive from a successful foraging trip, the speed at which the liquid is transferred (unloading rate) from donor to recipient is related to the profitability offered by the recently visited food source.

The interplay between the recruitment dance and food-giving trophallactic contacts of returning foragers were analyzed (Farina 2000). Dancing and trophallactic events were recorded for bees returning from a rate feeder that provided 50% weight on weight sucrose solution at a constant flow rate of 5 µl min-1. Bees that had danced immediately before their trophallactic contact had more recipients per trophallaxis compared with bees that did not dance before. Thus, besides information coded in dancing behavior, dance maneuvers could serve as a stimulus to increase attention of bees located on the dance floor to receive nectar. In addition, the number of bees receiving food during a trophallaxis showed a positive correlation with the probability of dancing immediately after contacting. The time from arrival at the hive to when the first or the subsequent contacts took place presented no correlation with the probability of dancing after trophallaxis. Also, the duration of a trophallaxis was positively correlated with the number of recipients per trophallaxis. These results suggest that returning foragers could receive information during a trophallactic contact with their hive mates that modify thresholds for dancing. Dance maneuvers and trophallactic contacts performed by foraging bees seem to be “mutually” affected.

Pollen foragers quickly sense increases in colony pollen stores, and modify their foraging activity appropriately. In association with these changes in foraging behavior, nurse bees transfer a larger portion of newly synthesized 14C-phenylalanine-labeled protein to the foragers. These findings support the hypothesis that trophallactic interactions between nurse bees and pollen foragers may serve as a cue apprising pollen foragers of the colony’s need for pollen (Camazine et al. 1998).

Protein for honey bee larval development is derived from the digestion of pollen. Adult bees also require protein (Crailsheim 1986; 1990a). However, not all bees consume and metabolize pollen equally well. Workers approximately eight days old are the colony’s primary pollen processors and distributors. They act as nurses, feeding proteinaceous hypopharyngeal gland secretion (jelly) to the larvae. They also feed jelly to other colony members (Crailsheim 1990a, b, 1991). The gastrointestinal tract of these pollen processor bees has the highest pollen content and their midgets have the highest proteolytic activity of all bees in the colony (Moritz and Crailsheim 1987; Crailsheim et al. 1992). In addition, their hypopharyngeal glands are especially well developed (Moritz and Crailsheim 1987; Crailsheim and Stolberg 1989). In contrast, pollen foragers themselves consume little pollen, have little enzymatic capability to digest pollen, and have atrophied hypopharyngeal glands (Moritz and Crailsheim 1987; Crailsheim 1990a). Thus, the pollen processors serve as the colony’s consumers and distributors of protein through trophallaxis, while foragers act as the pollen collectors.

Protein for honey bee larval development is derived from the digestion of pollen.

Early reports indicate that trophallaxis may allow honey bees to assign nectar odors with predictive values to anticipate biological meaningful reward stimuli. Nevertheless, this type of learning has not been addressed directly. Gil and De Marco (2005) paired bees in isolation to induce trophallaxis under controlled conditions and afterwards, the honey bee proboscis extension reflex was used to investigate the possible role of trophallaxis in learning olfactory cues. Their results demonstrated unambiguously that associative learning actually occurs by means of trophallaxis. Bees associate the odor (as the conditioned stimulus, CS) and the sucrose (as the unconditioned stimulus, US) present in the solution they receive through trophallaxis. Moreover, this particular kind of learning leads to long-term olfactory memories after a single learning trial, even when trophallaxis is brief. In addition, they found that the strength of association is clearly affected by CS and US intensity as well as the recent previous foraging experiences of the bees.

Tezze, A.A. and W.M. Farina 1999.  Trophallaxis in the honeybee, Apis mellifera: the interactions between viscosity and sucrose concentration of the transferred solution. Anim. Behav. 57: 1319-1326.

Velthuis, H.H.W. 1972. Observations on the transmission of queen substances in the honeybee colony by the attendants of the queen. Behaviour 41:  105-129.

Wainselboim, A.J. and W.M. Farina 2000. Trophallaxis in the honeybee Apis mellifera (L.): the interaction between flow of solution and sucrose concentration of the exploited food sources.  Anim. Behav. 59: 1177-1185.