26 Types Of Honey And What Makes Them Unique

The next time you’re perusing the grocery store and find yourself reaching for that bear-shaped bottle of honey, think twice. While that familiar golden bear may get the job done as far as a sweetener is concerned, it’s not the best honey. We’ve got the buzz on 26 types of raw honey that are way better than the stuff that’s collecting dust in your pantry right now.

According to the National Honey Board, there are more than 300 varieties of honey in the United States alone. The flavor, color, and unique medicinal properties vary based on where the honeybees collect their nectar. Honey may be local (from a specific area), monofloral (from a single type of flower), or from a variety of flowers, which is called polyfloral or multifloral.

Lighter honey typically has a sweeter, milder flavor than darker varieties, which can be quite bold and even bitter rather than sweet. You may not notice a difference if you’re adding it to a sauce or mixing it into your tea or smoothie, but the flavor nuances are noticeable when you slather some liquid gold on your biscuit, mix it into plain yogurt, or lick some from a spoon.

Try raw, unprocessed honey for yourself to taste the difference. Visit your local farmer’s market, health food store, or specialty shop to find it. Meanwhile, read this sweet guide to some of the most popular honey varieties to decide which ones you’d like to try. 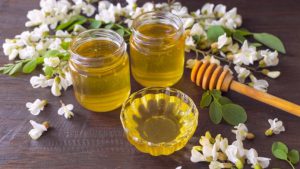 Acacia honey is made by bees that feed off the flowers of the black locust tree, which is also called the false acacia tree. In North America, it’s commonly marketed as locust honey, but in Europe it’s sold as acacia honey (per Healthline). It is valued for both its taste and its medicinal properties.

Acacia honey has a floral aroma, a sweet taste with a hint of vanilla, and a light, almost transparent color. It is slow to crystalize, so it stays in its liquid form longer. Because of its mild, sweet flavor, it’s a great one for kids and honey-averse adults to try. Mix it in yogurt, spread it on toast, stir it into your tea, or serve it with cheese.

Rich in antioxidants and antibacterial properties, acacia honey is used to encourage quick healing of wounds and may help prevent acne. If that weren’t enough, it stopped the spread of lung cancer cells in one test tube study (via PubMed). 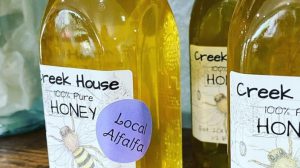 According to Backyard Beekeeping, most alfalfa plants in the United States are grown to feed livestock. Most plants are cut down long before bees get a chance to pollinate them. However, some plants are reserved for honey making, though getting to the nectar is quite a challenge. The shape of the alfalfa flower makes it difficult for honeybees to access the keel, so beekeepers and farmers first employ leafcutter bees to trip the flowers’ keel, opening them to expose the pollen and nectar.

This somewhat rare type of honey is a gem indeed, with a slightly bitter but overall sweet taste with hints of vanilla and mint. The taste is similar, though slightly less sweet, than clover honey. It has a floral aroma and is generally pale amber in color. Its mild flavor is ideal for a number of culinary uses, such as making salad dressings and sauces, pairing with cheese, or serving over your pancakes or waffles.

Medicinally, its antiseptic properties make it useful in treating wounds, soothing sore throats, and calming stomach irritation. It also has prebiotic and probiotic effects, stimulating the growth of healthy bacteria in the gut. 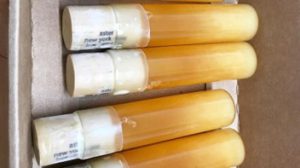 Found primarily in the Mid-South region of the United States, aster honey is a type of monofloral honey that has a strong odor when it’s first harvested. Fortunately for all of us, it mellows out as it ages to produce a smooth, thick honey with a sweet taste and aroma. Use it as a sweetener for your drinks, a topping for your morning muffin, or as a sugar substitute when baking and cooking.

Like many honey varieties, aster honey can be used for treating wounds since it both dries them out and hampers growth of bacteria and fungi. While honey may promote wound healing in some, a different study in The Lancet has shown that it may increase infection in people with diabetes, so use caution and follow the advice of your doctor.

You may have some difficulty finding aster honey is a monofloral honey, but it’s more widely available as a predominant source in multifloral wildflower honeys.

We are here to share current happenings in the bee industry. Bee Culture gathers and shares articles published by outside sources. For more information about this specific article, please visit the original publish source: https://www.mashed.com/865671/types-of-honey-and-what-makes-them-unique/?utm_campaign=clip