Economic Outlook and Other Consideration

Almond Industry Update
Almond prices rebounded this summer due to a lower than anticipated almond crop for the 2021-2022 marketing year, following roughly a year of low almond prices. Nonpareil inshell prices hovered around $3/lb in August 2021 according to Merlo Farming Group, 74% higher than August 2020. Prices of other varieties have increased more moderately, with shelled Monterey and Carmel both at $2.09/lb, 45% above their August 2020 prices. Relatively low competition from other exporting countries, coupled with steady growth in almond demand have kept almond prices strong despite monumental growth in production over the last two decades (Bruno, Goodrich, and Sexton, 2021).

Despite the recent increase in almond prices, the outlook for almond growers is not all positive. Consecutive years of drought in California have limited surface water availability, and the drier than average outlook for the upcoming winter shows little promise of improving water availability (National Interagency Fire Center, 2021). In addition to surface water scarcity, the first groundwater sustainability plans required by California’s Sustainable Groundwater Management Act (SGMA) were approved for implementation in June 2021. The goal of SGMA is to lower groundwater extraction levels which have reached unsustainable rates in many areas. Because plans are just beginning to be implemented and have up to 20 years to reach sustainable extraction rates, it is unclear how exactly SGMA will impact the almond industry and California agriculture in general. However, restricting water extraction will likely increase the cost of water as well as decrease the amount of acreage in production, especially in areas that rely heavily on groundwater sources for almond production.

The Almond Board of California and Land IQ estimate the removal of around 48,000 acres of almonds by September 2021, approximately 3.6% of the 1.3 million bearing acres in 2021. This is up slightly from 2020, with an estimated 39,000 acres removed. Aging orchards are the likely candidates for removal, and we have heard speculation from a few industry sources that some orchards will be removed after harvest due to water scarcity concerns. Land IQ estimates 13% of almond orchards are over 21 years old, compared to 20% of young orchards that will begin bearing in one to three years. Between June 2019 and May 2020, nurseries reported 66,000 acres of sales, with over half being for new orchards and the remainder replacing aging orchards. These numbers suggest that almond acreage is still expanding, though likely at lower rates than previous years due to the recent low prices and uncertain water availability. 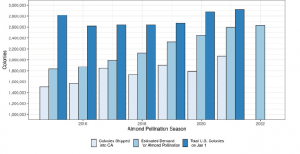 Figure 1: Total U.S. colonies on January 1, estimated demand for colonies, and shipments of colonies into California, 2015-2022

Colony Demand
Figure 1 plots the estimated demand for colonies based on bearing almond acreage each year from 2015 to 2022, as well as the total colony shipments into California for almond pollination and the total number of colonies in the U.S. on January 1. Estimated demand is calculated using two colonies per acre for traditional varieties and one colony per acre for self-fertile varieties (Shasta and Independence). A consistent gap between estimated demand and colony shipments is filled by colonies that remain in California year-round. For the 2021 almond bloom, roughly 1.3 million almond acres (3.3% in self-fertile varieties) required an estimated 2.6 million honey bee colonies for pollination (Figure 1). According to apiary shipment data provided by the California Department of Food and Agriculture, other states shipped 2.1 million honey bee colonies into California for the 2021 bloom, up 16% from 2020.

As seen in Figure 1, the estimated demand for colonies in 2022 is 2.63 million colonies, slightly above that of 2021. It seems the recent increase in self-fertile variety plantings have started leveling off the estimated demand for colonies. However, the colonies that will be required for almond pollination in 2022 still represents 90% of the 2.92 million colonies in the U.S. on January 1, 2021, so at least in the short run, it’s unlikely this leveling off of demand will put downward pressure on pollination fees. Additionally, an article published in Nature found the Independence variety showed an increase in yield by 20% from allowing bee visitation (Sáez et al. 2020). This study eliminates any claims that these self-fertile varieties do not require honey bee colonies for commercial production. Growers of self-fertile varieties who do not currently place honey bees in their orchards are likely “borrowing” pollination services from neighboring orchards. In the future, growers with traditional orchard varieties surrounded by many self-fertile orchards with few (or no) colonies per acre may have to compensate by placing more colonies per acre.

Weather Impacts on Colony Supply
Much of the western U.S. and major honey producing states in the northern plains have been under severe drought conditions throughout the summer. Figure 2 shows the U.S. drought monitor for the week of July 27, 2021. As of the week of October 12, 2021, 35% of the U.S. is still in a severe drought or worse. Consequently, many commercial beekeepers have seen decreased honey production, increased costs of feeding, and poor colony nutrition, all likely to negatively impact the supply and strength of colonies for almond pollination.

To get an idea of potential impacts of this drought, we looked back to 2012 when a similar drought took place. In October 2012, approximately 40% of the U.S. was in a severe drought or worse, slightly more area affected than our current situation. Table 1 provides a comparison for the Northern Plains Climate Hub states (Montana, Wyoming, Colorado, Nebraska, South Dakota, and North Dakota) where most commercially managed honey bee colonies are located for honey production in the summer. This shows a similar percentage of this area was impacted by drought-like conditions, but in terms of the worst drought categories, Extreme and Exceptional, the 2021 drought has affected more of this area than the 2012 drought. 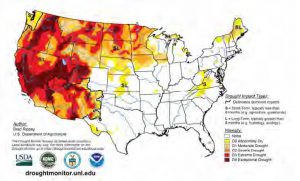 According to national honey yields from USDA, the 2012 honey crop was the lowest production in over 30 years. Figure 3 (next page) shows winter mortality rates and colony strength delivered at almond pollination for years 2010-2021. Following the 2012 drought, winter mortality rates were 31% according to Bee Informed Partnership (BIP), 38% higher than the previous winter. Average colony strength delivered for 2013 almond pollination dipped 20% lower than the previous year. 2022 almond pollination could see similar impacts on colony availability and strength from the 2021 drought.

2021 Almond Pollination Survey Results
In February-April 2021, we conducted an online survey of over 90 commercial beekeepers that participated in the 2021 almond pollination market to better understand their almond pollination decisions. The sample represented over 19% of hives demanded for 2021 almond bloom. The following sections summarize some key findings of interest. Some participants chose not to answer certain questions, so sample sizes vary and will be indicated in figures, tables, and text.

Almond Pollination Fees
We asked survey respondents to report the fees associated with their largest almond pollination agreement in 2021. Reported fees ranged from $130/colony to $225/colony. Fees vary due to a number of factors, a primary determinant being the colony strength requirement in the agreement. Table 2 (next page) shows the average, minimum and maximum pollination fee by colony strength requirement. Figure 4 (next page) shows box plots with the average pollination fee received separated by frame count category and whether the beekeeper had contracted directly with the grower or through another beekeeper or broker. 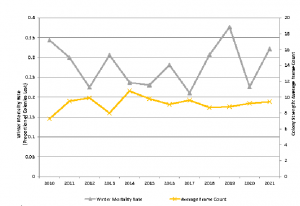 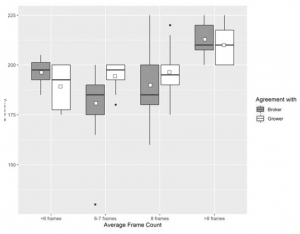 Figure 4:  Box plots of almond pollination fees by colony strength category and whether the agreement is with a pollination broker or grower.

The average fee received by beekeepers who contracted through a broker (or beekeeper-broker) was $193 versus contracting directly through a grower at $202 per colony (Figure 4). This suggests brokerage fees on average were around $9 per colony.

Colony Theft and Agreement Specifics
21% of beekeepers (16 of 77) reported that they had colonies stolen during the 2020 or 2021 pollination seasons. Thus, it seems colony theft is a relatively common issue for beekeepers who participate in almond pollination. 10 of 91 beekeepers (11%) reported that language is included in their pollination agreements that would allow them to be compensated by the grower if colonies were stolen. 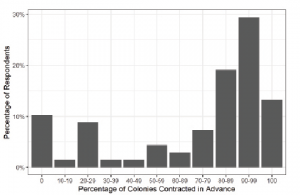 Figure 5: Percentage of beekeepers by the percentage of colonies contracted in advance for almond pollination (N=68)

Concluding thoughts
This summer’s drought may make preparing for almond pollination especially stressful for many beekeepers. Years with large winter losses and poor colony strength show the benefits of having a sufficient reserve of colonies that are not contracted in advance for almond pollination. In a year with widespread colony health issues, beekeepers will still likely be able to rent out those reserve colonies (even without meeting an eight frame requirement) once bloom nears and colony health and numbers are realized. 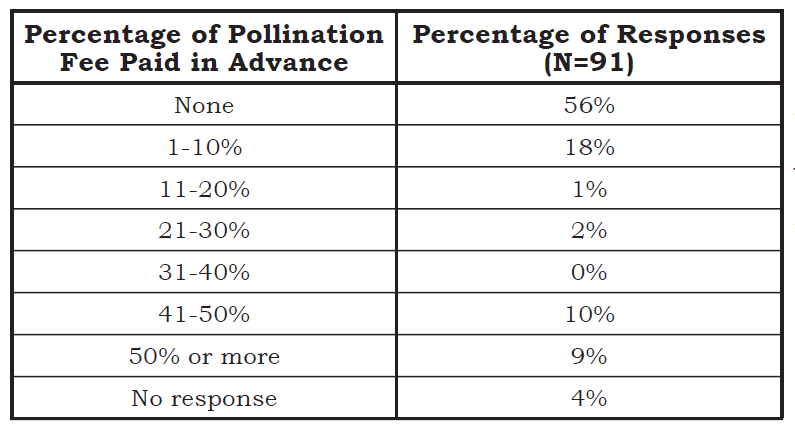 Table 4: Percentage of beekeepers by percentage of almond pollination fee received in advance of colony placement.